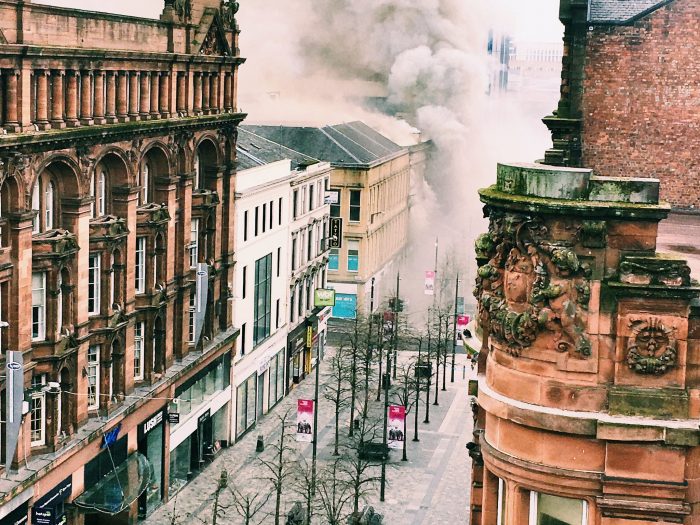 Up or down? What does the future hold for Glasgow’s Sauchiehall Street? Could this fire-haunted place become the centre of Glasgow City of Music?

The question comes with just a hint of provocation from Glasgow School of Art’s Professor Johnny Rodger as he sits in a bar with DJ Jim Gellatly.

They are discussing music, architecture, urban planning and other sometimes conflicting facts of city life for our latest Talking Feet podcast.

Sitting outside the Saramago Bar (yes, outside in Glasgow, and before the heatwave too!), our two commentators, both guides of Walking Heads tours, are roughly half way up – or down – the commercial part of Sauchiehall Street. 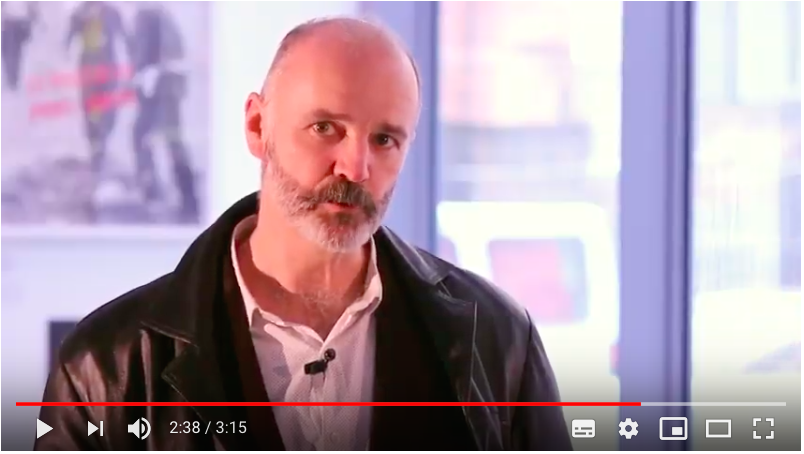 Well-placed, then, to contemplate the fate of two landmarks devastated by the blazing fires of 2018, as well as the tree planting which lends a softer, more optimistic view of the future.

Up or down? The answer is up for grabs. Within days of Talking Feet Episode 10 going live, the owners of the O2ABC, Academy Music Group, applied for permission to demolish the wonderful old Art Deco cinema – just a few steps from where Jim and Johnny had been sitting.

The music venue (it also features on Glasgow Music Tour), has been closed since the 2018 fire which all but demolished the Mackintosh building a little further up the hill. On the night of 15 June that fire also ripped through the roof of the ABC.

What happens next? While a petition opposing the demolition quickly gained support, Glasgow City Council was equally quick to stress that no decision has been taken. The owners are building their case with evidence from construction experts. But there’s a long bureaucratic process to go through yet.

Council leader Susan Aitken tweeted advice on how to make an effective planning objection. Glasgow Live followed up with further guidance on how and where to write to reject (or approve) the plans. Glasgow SNP MSPs Alison Thewliss and Sandra White have written their objection letters, along with Paul Sweeney, Labour MP for Glasgow North East, who describes the proposed demolition as ‘architectural vandalism’ arguing for ‘facade retention’ of the listed building.

What is historic environment?

That requires skilful wording and careful study of the city plan. And what is Glasgow’s historic environment? In many ways that’s what is at the heart of the conversation between our latest Talking Feet. Not the historic heritage of grand architecture, but the living, singing, often nostalgic, heritage of what places mean to people; the buildings that stay in hearts and minds – long after they have been reduced to rubble. 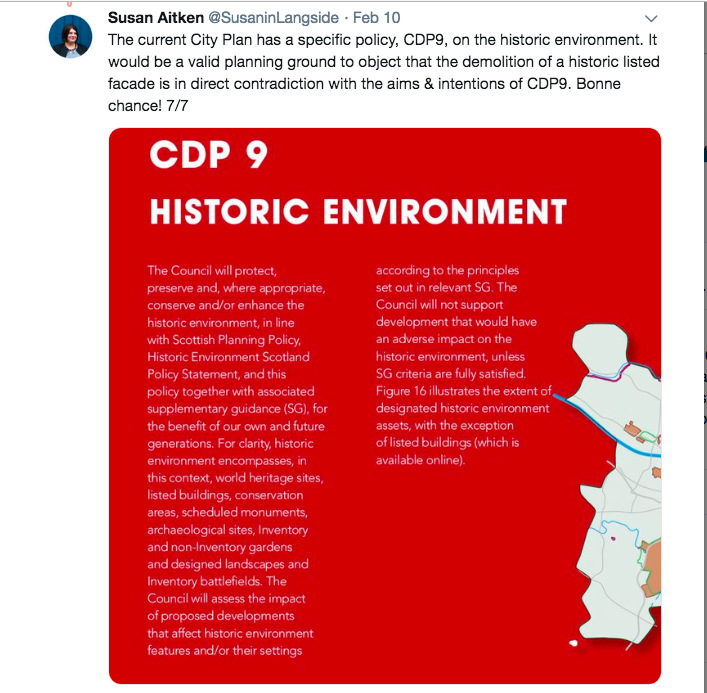 The human heritage of a building is not just the architecture but what happens inside. It’s what helps to create a sense of belonging. As so often in Glasgow there’s a vital, even visceral, link between the place, the people and the music they make together. Places like the ABC and the Mac have obvious aesthetic and architectural significance but emotional value has little to do with the façade in places like Nice N Sleazy, which provide the essential foundation of Glasgow’s grassroots.

And the threats are often more subtle than the demolition squad. So Johnny and Jim celebrate the continuing success of venues like Sleazy’s as they linger over what used to be the ‘scuzzier’ end of Sauchiehall Street.

Nostalgia is a sticky substance

This part of Glasgow has seen its share of ups and downs in the last hundred years. Are musicians the vanguard of gentrification, wonders Johnny, is music part of the remaking of a place? ‘Hmm, says Jim, ‘As long as you don’t get rid of the sticky carpets.’ More seriously, he imagines the immediate outcry if Nice N Sleazy’s existence were threatened.

Nostalgia is a stubbornly sticky substance. But this conversation mixes affection for the past (the long-gone Apollo) with welcome for newcomers and the buzzing ecosystem of the street

So many fantastic basement bars in Sauchiehall Street. And opposite the CCA a new venue called Blue Arrow, a jazz bar, how cool is that?’: Jim Gellatly

And the £7.5 million Sauchiehall Street face-lift: what’s not to like in tree-lined streets and pavement cafes (if Copenhagen can do it so can Glasgow)? But they have a challenge for city planners. Those derelict buildings? Those fire-razed sites? What’s the city plan?

While Jim makes a heartfelt case for the cultural value of the ABC, Johnny adds another provocatively good idea for that empty space once occupied by the Victoria nightclub. Gutted by fire in March 2018 it was demolished three months later. Now? Instead of just more shops, says Johnny, how about a new music centre.   Glasgow is a world music city isn’t it? Why don’t we have a centre for that in Sauchiehall Street?

Johnny Rodger: Glasgow is a world music city isn’t it? Why don’t we have a centre for that in Sauchiehall Street?

That’s up to the way we tell the story perhaps. There’s a great store of knowledge in this podcast – and one real cracker for a pub quiz which takes listeners far beyond the architectural appearance of the building. Which famous US President made his first public speech in Sauchiehall Street? And where?

Ok, we’ll tell you. The story begins with Jim and Johnny mulling over the different lives of another beautiful Art Deco building, The Beresford: former hotel, one time music venue, now converted to flats. 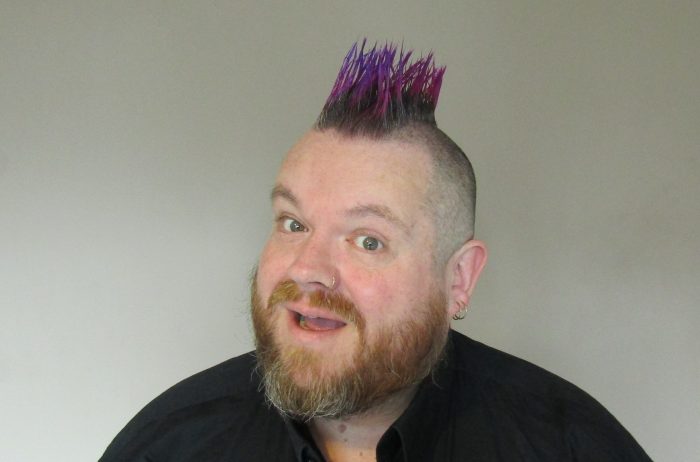 ‘No way, I’m going to have to Google that’. Jim Gellatly, voice of Glasgow Music Tour.

Johnny: The amazing thing about the Beresford is that is the first place that John F Kennedy gave his first public speech …

Jim: What, his first public speech in Britain?

Johnny: No! In the world. EVER. In his life.

Jim: IN HIS LIFE?

Johnny: He was a young man, he was in his early 20s…his father was the American ambassador in London…

Jim: No Way, I’m going to have to Google that later…that’s amazing.

And it’s true. Check for yourselves. But be sure to listen to the rest of this conversation. Heritage. History. A city plan – it always needs a heart.