This is what people are saying about us…

A new digital tour of Glasgow’s music venues past and present gives a rare insight into the city’s culture.

WHEN you’ve been to a certain number of big-name shows in Glasgow, you get used to hearing singers tell the audience that it’s their favourite city in the whole world to play. The truth is they really mean it, and that the atmosphere at a Glasgow gig which is going well really is second to none, but there’s sometimes no need to tell the crowd what they already know. Even seasoned gig-goers who think they’ve seen it all before, however, will find their eyes opened by the new Walking Heads music tour of Glasgow. An iPhone app which offers directions and audio commentary courtesy of new music DJ Jim Gellatly, the Walking Heads tour guides its audience around the venues – new and old, thriving and long gone – which have defined Glasgow’s music scene over the past two centuries and more.

“The tour’s primarily aimed at visitors to the city,” says Dougal Perman of Walking Heads, a sister company to his online music station Radio Magnetic and digital production company Inner Ear. “It scratches deeper beneath the surface from a cultural angle than your average guidebook. The more we researched the subject, though, the more we realised we didn’t know half as much as we thought we did about Glasgow’s music scene.”

While the tour was initially researched by Gellatly, local music bloggers including Stuart McHugh of Jockrock, and Perman’s mother – the writer and journalist Fay Young – the aim is that it will be updated annually in much the same way as any guidebook, hopefully with contributions from members of the public who have their own memories of Glasgow’s music scene to share.

“Those places you’d pass by without having any idea what used to be there, they’re the most interesting,” says Perman. He mentions the Chateau, Franz Ferdinand’s former ad hoc gig space and arts venue on the south side of the Clyde. “It’s a dilapidated warehouse,” he says. “Even if it was open we wouldn’t recommend anyone go in, but that all adds to the spirit of it.”

While the tour is understandably more concerned with the readily researchable facts of the rock era, it delves back as far as it can into the past of a city which has always been obsessed with music.

“Before rock’n’roll, music hall was the thing,” says Perman. “It was very bawdy, very male-dominated, where people went to cut loose and express themselves. Some of the stories about the Panopticon on Trongate (the scene of Stan Laurel and Harry Lauder’s stage debuts) would put any rock venue to shame in terms of bad behaviour. Then on the marginally more wholesome side there was a thriving folk scene, a lot of which was based around Clydeside bars like the Scotia and the Clutha Vaults, where sailors and merchants would pile straight off transatlantic voyages and into the bar.”

“My first gigs were at the Barrowlands,” says Gellatly, who’s originally from Dundee, “nights out to the big city seeing bands like The Cramps, The Pogues and The Beastie Boys.

“What stands out for me is the sight of people throwing pints at the band, which is a term of endearment in Glasgow, believe it or not. I always thought, why would anyone from Glasgow want to throw their pint away?”

The experience will bring back similar memories for anyone who’s grown up with these venues in their lives.

Musical mystery tour that puts a city on the map 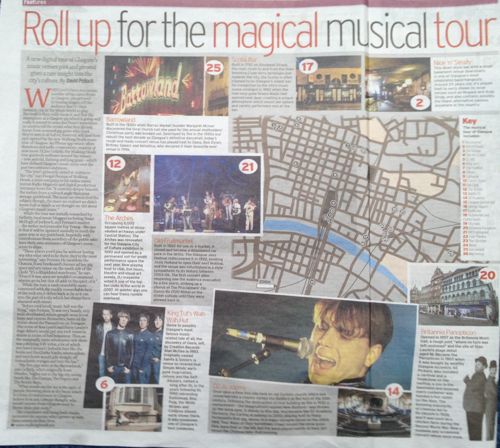 Glasgow’s music pedigree is enviably rich and ceaselessly wonderful, yet the one detail its natives are most reminded about is that Oasis were “discovered” at King Tut’s. Whatever.

Thankfully this piece of neuro-numbing trivia only makes up a teeny-tiny segment of Walking Heads’ Glasgow Music Tour.

The 4½ hour audio walking tour, which is split into 60 chapters, is presented by Jim Gellatlyand features interviews with the likes of Vic Galloway, Billy Sloan, Stuart Braithwaite and Emma Pollock to keep you entertained and informed as you navigate the city’s gum-addled streets on a culture-quenching mission.

The venture is the brainchild of Radio Magnetic parent company Inner Ear, who have already produced an Edinburgh Comedy Tour. 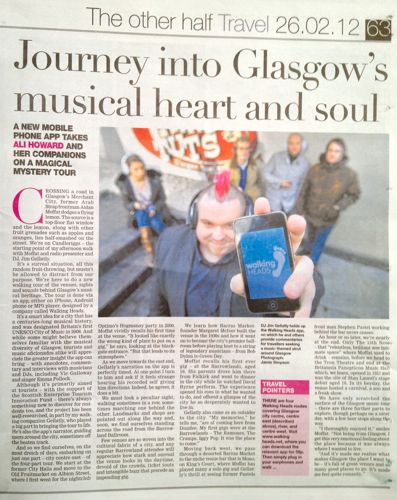