Streets are busy with people but we have nowhere to go. Walking the old route of the first Edinburgh Comedy Tour, Fay Young wonders what kind of city will emerge from lockdown. 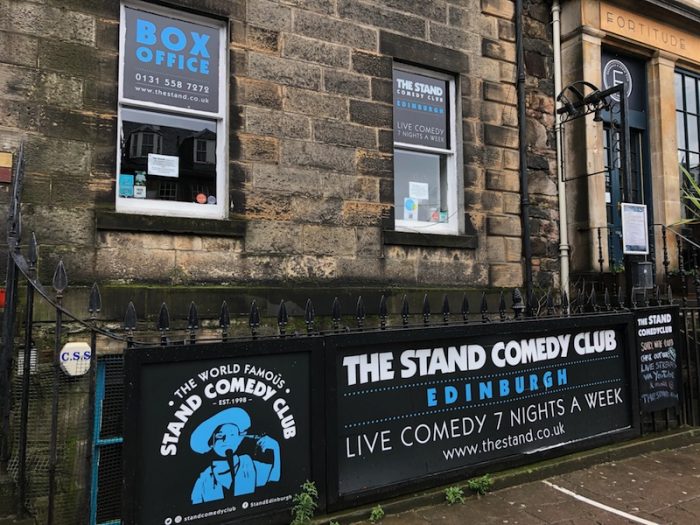 A bedraggled blue mask (now removed) hung from the black railings outside The Comedy Stand in Edinburgh’s York Place. A sad scrap of Covid litter seemed to sum up the sorry plight we are in. Venue doors closed, windows darkened. If we are looking for a laugh we must go online.

Hard to believe this is the lively place we ended our first Edinburgh Comedy Tour.  An irreverent romp through Fringe-packed streets was led by gleefully wicked young comedians Jamie MacDonald and Harry Gooch. In sunnier times almost ten years ago.

But the story is not over, and it’s taking curious twists. Let’s begin again.

One wintry day before Christmas brought another lockdown, I took a walk along the original route of the Edinburgh Comedy Tour.  This was a pioneering audio event which we (Walking Heads) launched during the Fringe of 2011. So long ago, it began as an MP3 download – apps were still a novelty. We attracted publicity in old media radio and newspapers with the very idea of a digital event.  “You listen through headphones, on your phone? Amazing. How does that work?”

Who could have predicted a future where the only available comedy, music or drama events would be found caged in our laptops, smartphones and tablets?

I’m not sure. I’ve been hesitating for several months.  During the first lockdown it didn’t feel quite right to be promoting our audio tours. Too opportunistic maybe, even if they are free.

Yet, as lockdown stretches ahead without clear end in sight, why not? It’s good to get out. Good to share different daily exercise routes to stimulate body and mind. Let me reword that. It is not just good, it is vital to get out, to keep connected with places that mean something, While we must save lives (yours and mine) by keeping at a safe distance from other people, staying indoors is not normal.  We need to get out.

And lots of us do.  Walking through the city centre reveals a cruel disparity.  Plenty of people around (more than during first lockdown) but we have nowhere to go: no shops, no pubs, no cafes, no live music, no live comedy….

Something else is strange about this scene. The Royal Mile, usually packed with tourists at any time of the year is now the haunt of local people. That’s not bad, but it signifies the coming conflict, a continuing debate: how to balance culture and commerce in a city good for citizens as well as visitors.

Too big, too greedy…

Let’s head for the Fringe Shop. This is the starting point of Edinburgh Comedy Tour where Dougal Perman introduces the stars of the show, Jamie and Harry, conjuring up images of the bustling street.  Now closed, the shop window displays a T shirt welcoming 2021.  Will there be a festival this year?  What will it look like? Who will come? 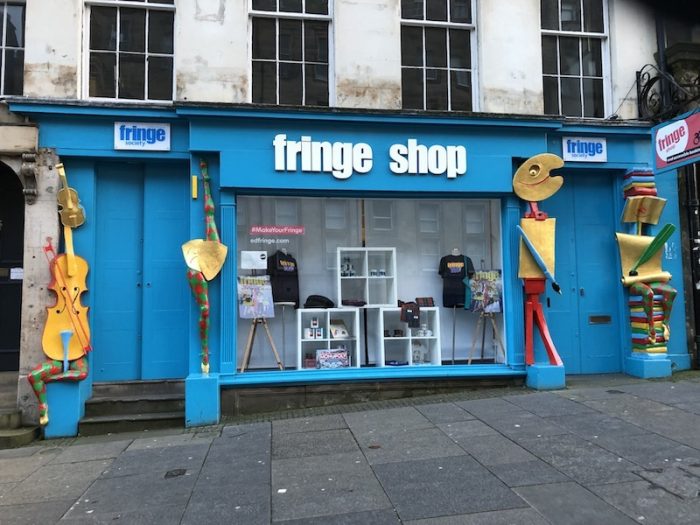 Before Covid there was a growing campaign against ‘overtourism’. Can we hope for a better new beginning? Even as we promoted our digital experiment ten years ago, there was simmering awareness that the Fringe was getting too big, too greedy, too commercial.

By 2019, as veteran culture commentator Joyce McMillan observed on the Cockburn Association Conference webinar Whose Festival is it Anyway?: the scale was overwhelming. The programme so bulging with  events no-one could get their minds round it:  ‘Almost too big to talk about’.  Covid, added Morvern Cunningham, of LeithLate, brings the chance to think more creatively about festival space – outdoors and reaching out beyond the city centre.

“Are you a spirit from the deep” asks Jamie at Stop 7, Deep in the Underbelly by the cavernous entrance to the Underbelly in the Cowgate.  It’s a joke…part of the increasingly crazy chase through Edinburgh comedy history (you need to listen – and laugh). But it rumbles now with new meaning.

In the 21 years since the Underbelly opened in the Cowgate the company has grown to dominate Scotland’s capital city not just in August but over Christmas and Hogmanay. Even during the pandemic.  While other venues are shuttered, with furloughed or (more likely) redundant staff, the Underbelly has been remarkably successful in gaining public money. The Farewell drone film commissioned for Edinburgh’s digital Hogmanay 2020 attracted at least £800,000 in matched funding according to the Scotsman’s Brian Ferguson. Bella Caledonia estimates more than £2m.

James and Harry have fun, too, with the Udderbelly in Bristo Square – a very different place in 2011 before University of Edinburgh student’s village occupied the space. Today it sits in suspended animation. The windows of the students’ wellbeing centre have the look of an Edward Hopper painting. 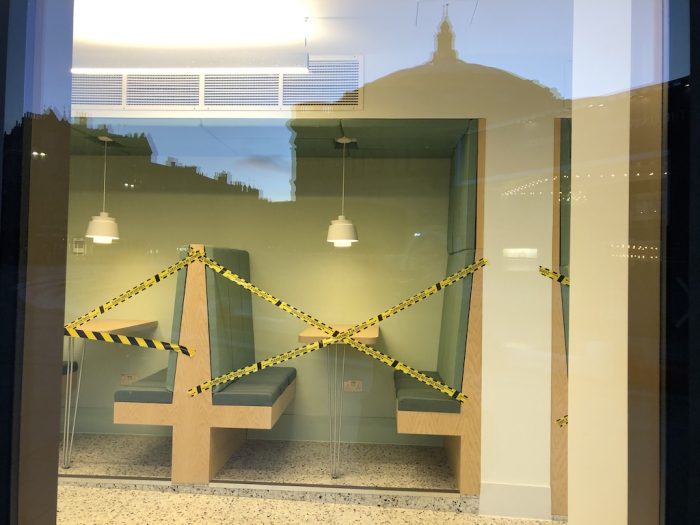 Black Lives Matter has changed the landscape, the way we see things – and what we call them.  David Hume’s toe has lost its burnished gleam with no tourists to polish as they pass.  But his name (tainted by discovery of unenlightened comments on slavery) has been erased from the Edinburgh University building on George Square. Now simply Number 40. Our guides might have fun with that.

Nearing the end of the tour, in St Andrew Square the towering Viscount Melville has been brought down to size too. “Was he a good man?” asks Harry in the nail-biting climax of the show, “Harry, he was a political powerhouse,” replies Jamie, listing evidence of the Dundas reach (our Prof studied history before he took to comedy).

The two comedians make proper fun of the monument but I would love to revisit the scene since the statue-toppling debate over how to deal with the man who delayed the abolition of slavery.  A new plaque has been commissioned to put the record straight. Our guides might have fun with that too.

Back to The Stand

In the original tour Harry makes the short journey round the corner to The Stand sobbing as Jamie dangles digitally from the top of the monument crying, “Fringe why have you forsaken me?”  (It’s a lot funnier than I make it sound, you have to listen.)  This cold wintry day I feel a different sadness looking at old posters promising live comedy 7 nights a week, new signs directing supporters online.

“No gigs, no customers and no income from box office and bar sales”

The Stand website states the harsh reality facing creative enterprises like The Stand.  Their Edinburgh and Glasgow venues have received £250,000 from Creative Scotland, “This is the maximum grant possible” says The Stand, “and demonstrates that our venues provide a significant cultural offering and that we are a viable business which deserves to survive and continue to grow post Covid19.”

So it does. But by the end of March 2021 The Stand will have been closed for 12 months. When we launched this audio tour nearly 10 years ago we set out to tell an entertaining history of Fringe comedy, while also celebrating its maverick grassroots venues. If we want our essential grassroots to have a future we must play our part.

We can walk and talk about them, keeping their name alive. But we must press our politicians, policy makers and philanthropists to invest in creative, blue sky thinking so we can keep both covid-safe and get a life.  Meanwhile, yes, we can support our much-loved venues online.  You can buy tickets to virtual shows at The Stand HERE. And donate HERE 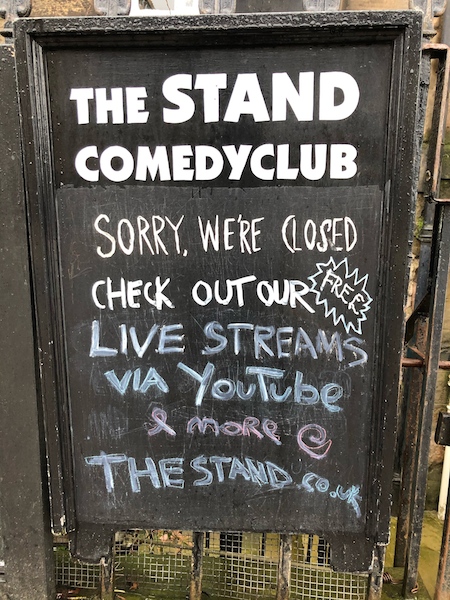 Fay Young is research and development director of Walking Heads, and co-editor of Sceptical Scot

Whose Festival is it Anyway? Joyce McMillan hosts the first of 5 Parts now on Cockburn Association YouTube channel.

Letter to Rishi Sunak  via Chortle Campaign to save live festivals and events: