Scratch the surface of the city

Scratch the surface of the city

Every street has stories to tell and we didn’t have to go far down Manderston Street to find one. 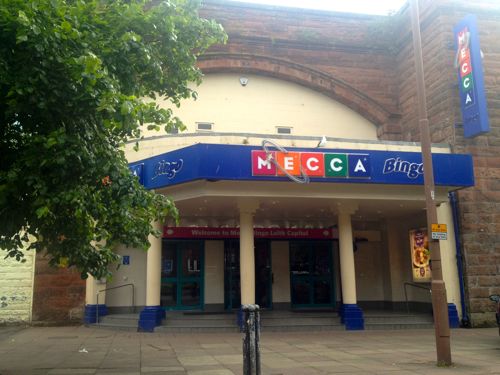 Underneath the arches….an old cinema

In fact we were looking for the site of the new street art about to burst on the scene in a quiet corner of Leith (see last week’s Pride of Place). But along the way there are buildings calling out for attention. Half way down, what artist Fraser Gray describes as Mechanics Row, the old Mecca Bingo Hall catches the eye.

Like many (most?) bingo halls it began life as a cinema and evolved into a different kind of meeting place during the 1960s when television began to get a grip of the mass audience. Here stands what used to be The Capitol, one of the largest cinemas in Edinburgh with a seating capacity of 2,300 when it was built in 1928.

Wanting to know more we turned to our friend Gordon Barr, the cinema buff who provided the stories for our Cinema City Treasure Hunt during this year’s Glasgow Film Festival. Gordon also shares responsibility for the excellent ScottishCinemas.org with his friend  Gary Painter. Together they have created a real treasure trove of info about cinemas past and present, reinvented or long gone from the city landscape.

Glasgow, Scotland’s foremost ‘cinema city’, has been famously successful at reinventing many of the original old picture houses (and many of them feature on our Glasgow Music Tour). But Edinburgh has a good selection too and Gordon has created a walking route round the buildings that remain. Once you get your eye in there is something very satisfying in learning to spot those grand old palaces of fantasy. Gone are the places with evocative names like Alhambra, Astoria, Palace, and Palladium. But see how others have found new life as the Festival Theatre and the Playhouse.

And The Capitol – perhaps the only cinema built into a railway bridge. The audience entered beneath a railway arch and walked through to the auditorium on the far side of the tracks.

The bridge has a story to tell too. This once carried the old Caledonian Railway line across Leith Walk down to the docks.  Incidentally, there are ambitions to build a new bridge, a green bridge, creating both a new landmark and a green corridor across Leith Walk for walkers and cyclists.  But that’s another story. 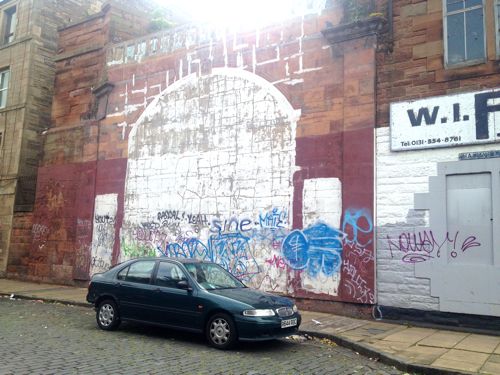 End of the line: the wall in Halmyre Street waiting for the artists to arrive

If you haven’t already found it, treat yourself to a meander round ScottishCinemas which now has photographs and stories of 1,140  cinemas. And counting. Be warned, the enthusiasm is catching.