Ding ding.  There’s another one. Word is going round, in tweets, and more importantly, out in the streets. There’s no doubt about it. Edinburgh’s tram is finally in town. And is that just the faintest whiff of excitement in the air? Watching the test runs gliding along Princes Street you can’t help wondering whether this is set to become one of the world’s great tram rides. 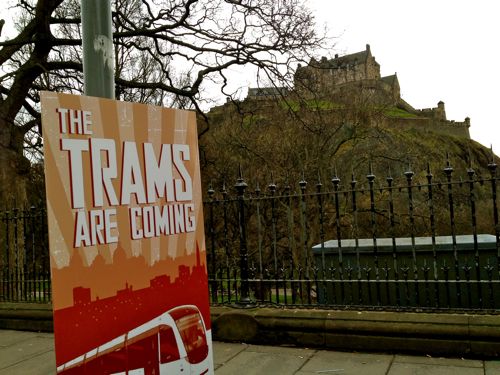 Not such a daft idea.  National Geographic has listed their Top 10 Great Trolley Rides  in their book Journeys of a Lifetime.  Admittedly they include charismatic routes like Lisbon’s gravity defying runs packed with tourists, Hong Kong’s double-decker ride, and San Francisco’s F-Line from Castro to Fisherman’s Wharf.

When you look at the rest you can see that great cities and exciting tram trips belong together: Budapest, Berlin, Amsterdam and New Orleans (where the streetcar has returned after the devastation of Hurricane Katrina).

At the risk of sounding like tram-spotters,  we’ve been on six of the Top 10  –  maybe one day we’ll make New Orleans, and Melbourne, Seattle and Toronto too.  Although it has been sometimes safer not to say so in Edinburgh, we’re unashamed tram fans.  They are such a great way to travel; quick, clean, socially inclusive and, usually, cheap. 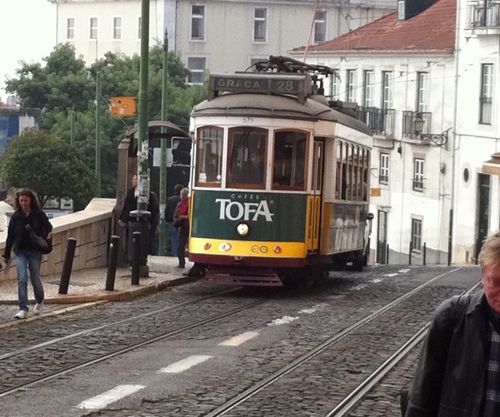 Lisbon trolley ride: it gets much steeper than this.

The best planned cities have tended to design housing  developments round tram and train routes making it easy for people to travel to work and back at an affordable price.   Glasgow, the last city in Britain to abandon the tram, prided itself on a one-price ticket.  “There was no class distinction on the tram, everyone paid the same price,” John Messner, Riverside Museum curator of transport and technology told us (Goodbye and hello to the tram).

It will be interesting to see how quickly Edinburgh residents take to their new tram when the service begins in May. It’s just a 35 minute, nine mile run from the airport to York Place.  But that  one mile stretch along Princes Street could be a tourist attraction in itself (as long as tourists look out on the Castle side).  Just a pity that the tram doesn’t go on down to Leith (‘From airport to seaport” was the original promise). New hopes are stirring for Leith Walk but the Scottish Government has made it very clear that they will not be shovelling any more money into tram shaped holes in the ground.  No more money. Not a penny more.