“You don’t need a weatherman to say which way the wind blows”.  The busker giving it his all outside Dr Marten’s in Sauchiehall Street was not wrong.  We were walking into a south westerly and it was already full of rain.  Luckily the last lap of our treasure hunt was going to be undercover. 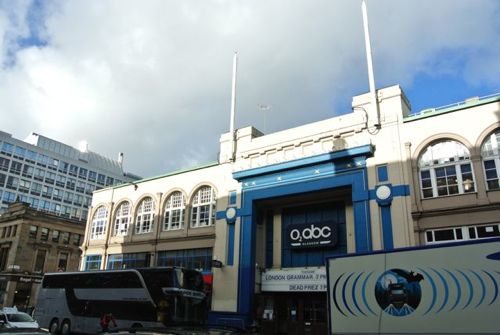 Is that blue sky we see? Photographer Andrea McCarthy was lucky!

The weather had not been kind.  For most of the ten days of Glasgow Film Festival it had rained, and rained hard.  Understandably that had deterred some of the keenest participants in our second Cinema City Treasure Hunt. “I’m sorry,” Tommy posted on our Facebook events page, “The weather stopped me playing yesterday but will try again on Saturday.” Julie, Lucy and Andrew tweeted much the same.

Last year, when we ran a one-day trial event with Glasgow Film Festival, we were blessed with a sunny Saturday (Murder, Mystery and High Tea).  That meant a rush of people through the streets and a bit of a bottleneck at key stops on the treasure hunt. This year we decided to make our new treasure hunt app available for the whole festival, so that people could take part whenever they wanted – and Waterstones might be spared a sudden invasion of clue hunters.  Who could have guessed so much rain would fall on Glasgow for so many days?  (Ok, we could have guessed but it still seemed unlucky.)

We can confess to some anxious moments.  What if no-one took part? But, on the last Saturday the sun shone, people came out to play and teams began to tweet their results.  That was more like it: some social media excitement and friendly competition. On Sunday we made our way down Sauchiehall Street looking forward to a proper party in the nice warm dry Saramago Bar. And winners for our lovely prizes!

That’s exactly what we got. Once again our quizmaster Austin Yuill worked his quirky, quizzical magic and the bar  was all the cosier when we looked out the window. Since then we have had great feedback. 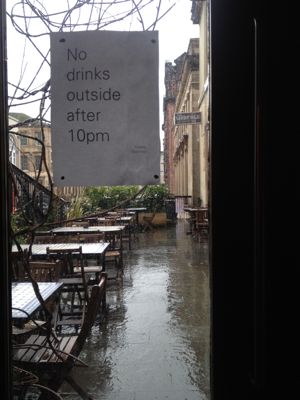 See what we mean?

This was an experiment – we were keen to try out the new gaming functions on the GuidiGO platform and Glasgow Film Festival gave us the opportunity we needed to see how it worked.  After the success of last year’s Cinema City event, we also wanted to see if we could combine an interactive game with the excitement of a live event.

And the outcome?  Perhaps it is best summed up by our first prize winner Lesa Dryburgh who later said she loved the thrill of being asked to do something a bit daft  ( treasure hunters were asked to take photos of themselves as they solved riddles out on the route). “But for me, what really made it was the live quiz at the end, knowing we would be able to meet up in person and see who else was taking part.”

For us, that’s encouraging confirmation that mobile technology can create social events in the real world.

Here’s to everyone who made Cinema City Treasure Hunt another great experience.  Thanks for generous prizes: Tommy Perman and the Red Door Gallery, Waterstones, Glasgow Film Theatre and Inner Ear.  Thanks for special support from quizmaster Austin Yuill, cinema historian Gordon Barr, Glasgow Film Festival team, Saramago Café Bar, and GuidiGO tech team. And most of all thanks to the treasure hunt teams for braving the weather, bringing out the sun, and playing the game. 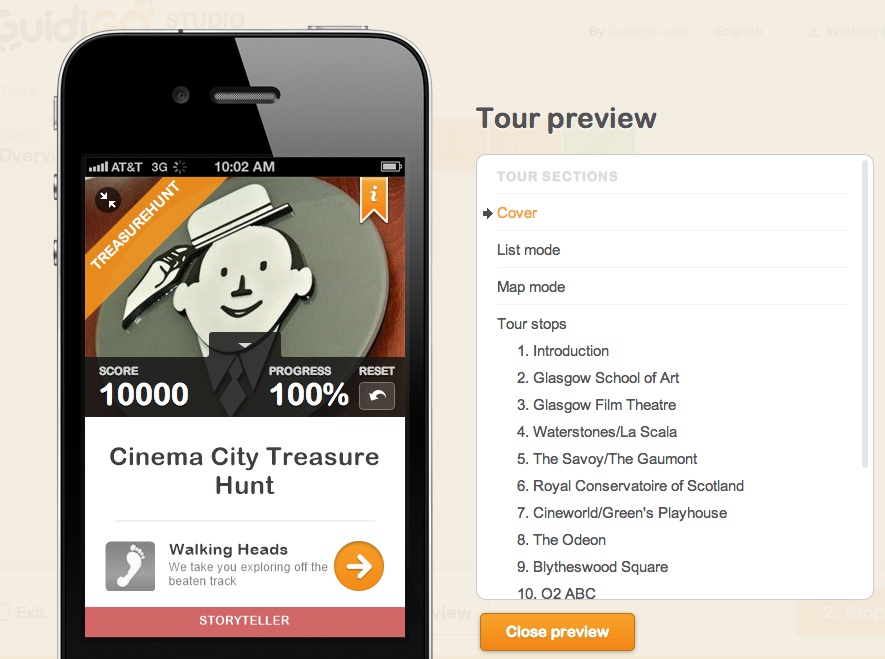