Guest blogger Kenny Forbes asks himself some probing questions about his research into the lasting appeal of the long-gone Glasgow Apollo – and what that says about the city.

Many thanks to everyone at Walking Heads for giving me this opportunity to elaborate on some aspects of my current academic study on the Glasgow Apollo (1973-85). Over the last few weeks I’ve been asked a wide range of questions from many different sources about its aim and purpose, what it entails and, on one occasion, who the hell was I?  I therefore thought it was appropriate to provide some of this information through responses to questions of this nature.  After all, it’s not very often that you get the chance to interview yourself! 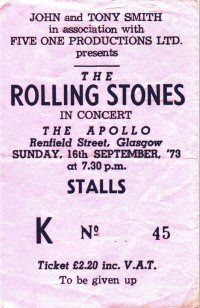 Q: Who are you and what type of academic study is this?

A:  My name is Kenny Forbes and I’m a mature student at the University of Glasgow, where I’m undertaking the study as part of a PhD thesis.  I’ve lived in Glasgow all my life and when this opportunity arose to do my PhD I wanted to do something on my home city.  Although this is an academic study, I also wanted this to be something that local people could relate to, and, in this context, thought the Apollo would be an ideal subject for analysis.

Q: Mature? Are you mature enough to have gone to the Apollo when you were younger?

A: Yes.  I went to my first concert there in October 1975 to see Sparks, and returned on numerous occasions to see artists like The Clash, The Ramones, The Runaways, The Jam and many, many, others.

Q: They all sound like quite cool bands. What about other artists you saw at the venue that you might not be telling us about?

A: Well, yes.  That would include Supertramp and … The Boomtown Rats (three times!) 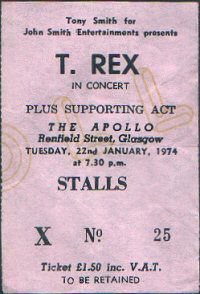 Q:  What’s the study actually about?

A: I think the venue could be considered to be a key part of the city’s social and cultural fabric. This is reflected in the large amount of media dedicated to the venue, and by the fact that many of those who experienced the Apollo at various concerts are still talking about the venue nearly forty years after it first opened.  So, the study is mainly about exploring why these Apollo memories still resonate after such a long period.

Q: You would think there’s been enough written about the Apollo: books, videos, websites, documentaries, articles and even a musical. Surely it’s all been said?

A: Good question. I’m very grateful to all of those who have established a wealth of information on the venue, most notably David Belcher (‘Apollo Countdown’), Russell Leadbetter (‘You Don’t Have To Be In Harlem’), Billy Sloan (numerous articles), Talisman Films (Apollo DVD), Scott McArthur and Andy Muir (glasgowapollo.com), Martin Kielty (Apollo Memories) and Tommy McGrory (‘I Was There’ musical).  Overall, it would be highly unlikely that I would have made as much progress without all this valuable research having been undertaken beforehand.  Having spoken to all the above (except Andy), I very much appreciate their support and contribution towards my own study.  To answer your question, I would like to build on the research already undertaken and, by taking a different path, hopefully add my own perspective on the Apollo phenomenon.

Q: What do you mean by ‘different path’?

A: I aim to look at elements that may have helped to shape the Apollo audience, such as significant social and cultural factors in Glasgow during the venue’s timeframe.  If you think about the vast changes the city was undergoing during the 1970s and 1980s – urban renewal, de-industrialisation and the move towards cultural regeneration – these factors would no doubt have an impact on the Apollo and its audience.  But the Apollo audience did not emerge in a vacuum, so this would also mean looking at the history of the city’s engagement with live entertainment, as well as examining notions of Glasgow’s demanding audience.

The UK live music industry at that time was quite different from its contemporary equivalent.  In a pre-arena age, the Apollo was ideally placed to accommodate major concerts by artists of global stature, many of whom would have been performing at their creative peaks.  Of course, this no longer applied after the early 1980s, and we start to find the venue becoming increasingly marginalized as live music inhabited new environments. Other factors to be analysed? This would include licensing, the live music infrastructure in the city, local media, audiences, cinema architecture, technology, urban renewal …. 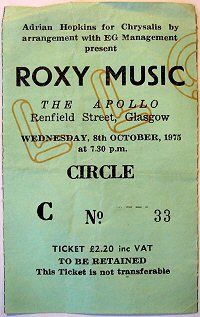 Q: Okay, okay, no need to go on.  I get the picture.  So, there are still quite a few things to investigate.  What have you done so far?

A: Most of the research so far has involved conducting interviews – with former management and staff, artists, promoters and audience members.  I’ve also spoken to academics, journalists, and media commentators, and, as mentioned above, those who have already made a contribution towards what we know about the Apollo.  And there is a lot of reading!

Q: It sounds like a lot of hard work.  Is it worth it?

A: Yes, very much so. I actually feel very privileged to be researching such a stimulating subject, and have also had the pleasure of meeting some really interesting people who have been very keen to contribute to the study.

Q: What’s this I hear about Focus Groups? What’s the purpose of this?

A: Yes, the next stage of the research involves a series of Focus Groups where small groups of Apollo audience members can meet and discuss their experiences at the venue.  It is hoped that this interaction will help the group members to reflect on why their Apollo memories still resonate after several decades.

Q: How do you find out more about this and get involved in the Focus Groups?

A: Visit the research website at glasgowapolloresearch.wordpress.com and click on the ‘Take Part in the Research’ section.

Q:  What else is going to be happening with the study and when is it due to finish?

A: I aim to keep the research website regularly updated with developments. I’ve been asked to post some of the key Apollo memories on the site, so that others can share these experiences.  I’ve also got one special announcement to make on the website about the study towards the end of the year.  The research process is due to be completed by 2014.

Q: If I want to provide details of my Apollo memories, is there some way I can send these?

A: Yes, I would be delighted to hear from you.  Email me at k.forbes.1@research.gla.ac.uk 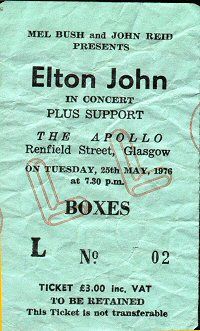