There’s so much going on in Previously Scotland’s History Festival it’s hard to know where to start but let’s take a stroll down to the Stand Comedy Club in York Place, Edinburgh to find our Susan Morrison examining Scotland’s comic soul. 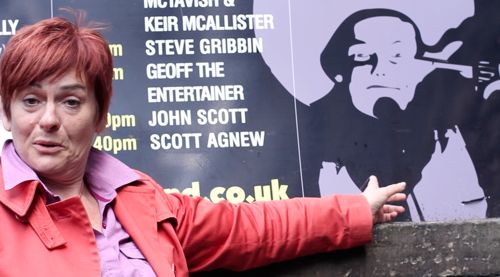 Susan Morrison outside The Stand in Edinburgh

We think of her as our Susan because she is one of the leading lights on Edinburgh Comedy Tour and  she proves that historical fact is often funnier than any invented joke. But plenty of funny Scots have made their mark on history and in Giggling Jock _ A Short History of Scottish Comedy, Susan (plus a few here-and-now comedian pals)  explores the legacy of greats like Harry Lauder, Rikki Fulton, Jack Milraoy, Chic Murray and Molly Weir. Make a note: Thursday 15 November 5.30 pm.

Susan is also a driving force of the history festival but it is not all laughs. In a rip-roaring Scotsman article the historian Tom Devine pays tribute to “the indefatigable Susan Morrison, Ian Harrower and their willing band of volunteers” who had the vision and determination to launch Previously, Scotland’s History Festival last year on an almost invisible budget.

Now they are doing it again this year, with an astonishing programme of 200 events in Edinburgh between 13 and 30 November. And still next to no public funding.

How do they do it? You just have to read the programme and visit the website to see it is exploding with enthusiasm – and some pretty formidable talent (John Sessions, Nigel Planer, Neil Oliver, to pull just a few names out the hat). Art, money, poetry, literature, war, the Union…there are all kinds of topics in events of all kinds in galleries, museums and libraries but as Tom Devine says the aim of the festival is to take history out of the lecture theatre back into the streets, cafes and bars, “to present it in the places where people usually gather and socialise”.

And so the last big event brings us back to The Stand Comedy Club for The Devine Interrogation when Professor Tom Devine (the ‘big beast of Scottish History’ as the festival programme describes him) gets to blow off more steam under questioning from the journalist Lesley Riddoch. Thursday 29th November 5-7pm. Book now!

PS: A stand-up Professor ripping into Scottish history, now what does that remind us of? Our ‘Professor’ Jamie MacDonald and his helper Harry Gooch are currently appearing in the flesh in Transylvanian Nights at various venues in Edinburgh but you can still catch them on Edinburgh Comedy Tour. 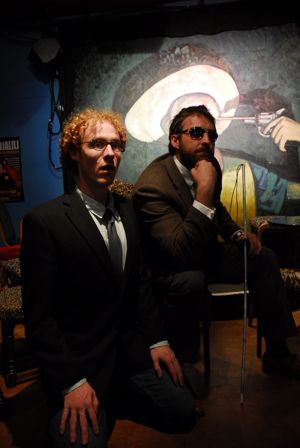 Our very own 'history professor', Jamie with helper Harry inside The Stand