Get app snap-happy on the Merchant City Tour

Get app snap-happy on the Merchant City Tour

A good picture is worth a thousand words, they say.  But what makes a good picture in an age of not just thousands but millions of digital images?  As far as Craig Smith is concerned the picture starts in the eye of the beholder – and a good app can work wonders too. 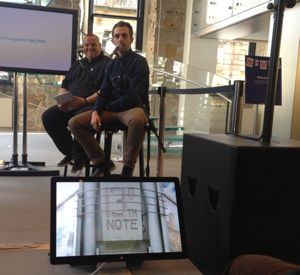 Craig, in front of Jim Gellatly, recalls a little music history too

Craig Smith, business manager at Glasgow’s Apple Store was helping us launch our Merchant City Musical Treasure Hunt with guidance on how to capture the best images on a mobile phone.

We wanted to know because there is a strong photographic element to the treasure hunt and quiz. Cryptic questions range from easy-peasy – ‘take a bite of the Apple with a photo featuring the famous logo’ – to more open-ended – ‘Glasgow’s world famous music scene means so much to people. Express your feelings with a photo’.

Your responses to such questions will be shown on the screen in the Apple Store over the next few days and the best will be published on the Walking Heads website.  So we asked for expert advice…

Craig modestly declined to be described as a photography expert – he’s never studied photography – but he made a convincing case for the ability of the mobile phone (no prize for guessing the make) to take original and creative images.

An unfiltered instant image caught our eye on the way home

“They say the best camera is the one you have on you,” he said, speaking into a mic carrying his voice above the bustle of the store, “and I always have my phone on me. I like the instantaneous thing about taking a picture on my phone. I can take a picture and edit it and publish it all at the same time.”

As he spoke the screen flashed up photographs proving his point: sunrise glinting on Buchanan Street taken on his way to work (they work hard in the Apple Store!), sunset on the Dennistoun gas works, reflections in Merchant City Buildings, shadows on cobbled streets.

Familiar places like the squinty bridge gained drama with the use of apps emphasising contrasts and textures.  Craig recommends Camera+ and snapseed as well as the well-known instagram

It’s inspiring stuff and a great chance to publicise your creative work. If you haven’t signed up yet, it’s not too late to enter.  Just email game@walkingheads.net for the clues and tasks which, by the way, include some nice quirky challenges. Oh, go on, why not “Release your inner rock star, grab a guitar and rock out.  Use your device’s video camera to record a short clip”.

Follow Craig on @_smittyboy and see many more of his images on Instagram.  You will be inspired! 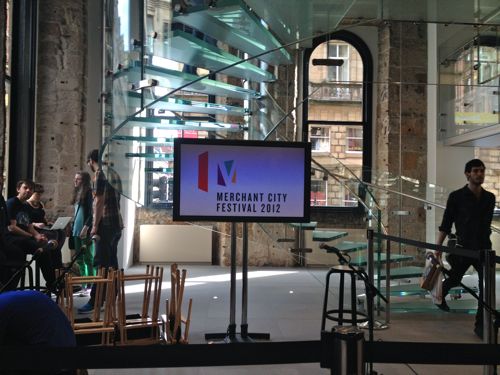 The screen awaits your images