Lost in music and the magic of the place…guest blogger Anna Levin relishes the many moods of the Old Fruitmarket now getting ready to rock with Merchant City Festival. 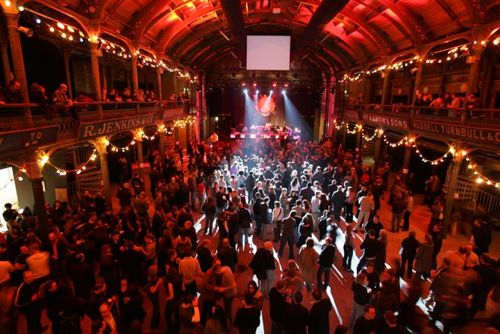 No matter how many times I visit the Old Fruitmarket, going into the venue always gives me a jolt of surprise. There’s a Narnia-like sensation of entering another world, like stepping back in time to another age or into a vividly realised stage set.

It’s something to do with the contrast. You come in off the street through the City Halls – the grandeur of the red-carpetted stairway, the modern lighting, sleek corridors and shiny floors – then you open a door and… Oh!

A pleasant lurch as your brain adjusts to the sudden difference in light and space. You feel taller because of the unexpected expanse above. Gentle lighting leads your eye up wrought iron pillars, passed balconies to the high wooden hull of a ceiling. The light is soft and inviting, the pillars and balconies decked with strings of multi-coloured lights, so that the whole place feels simultaneously spacious and cosy. 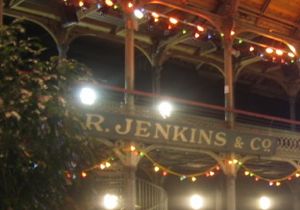 Then, by the light of the fairy lights, your eyes pick out the old traders’ signs still hanging all around the balcony, reminders that this place really was a fruit market right up until the 1960s. ‘CARRUTHERS & SONS LTD’ announces one, in large gilt capitals. ‘K. Robertson fruit and preserves’ reads another.

It’s such a deliciously pleasant space to be in that by the time you’ve met up with your friends, had a chat, bought a drink and looked around, the gig itself begins to feels like a bonus rather than the main attraction. It’s Celtic Connections that has drawn me here over the years and I’ve seen the venue in some of its different guises: from conventional lines of seats or calm and intimate cafe style with the audience seated around small candlelit tables – to the full blast with all chairs cleared away to make space for a wild, whirling dancefloor. 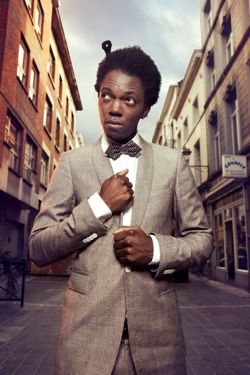 The Old Fruitmarket will get to show off its different moods hosting diverse acts during this year’s Merchant’s City Festival. Including ‘francophonic raps… retro funk and traditional Cape Verdean music’ in a Celebration of WOMAD and ‘a Vegas style night of illusions and showgirls…’ in Merchants of Magic Cabaret. It’s such a versatile space that you can read about all kinds of shows and think: “yep, that’ll work there.”

And there’ll be times when you’ll be lost in the music or the magic of the show, and other times when you’re aware of the venue itself as, slowly, over the course of an evening, other intact details reveal themselves – you suddenly notice the clock above the stage, or the spiral staircase, or start to wonder what kind of a man ‘T.Neale Commission Agent’ was. That’s when you feel a flutter of gratitude to whoever it was who had the vision to preserve this old fruit market and give it a new life as this enchanting place.

You can hear more about The Old Fruitmarket and the many bands and acts that play there on Glasgow Music Tour.  Then come and join our musical treasure hunt through the Merchant City as part of the Merchant City Festival in association with Apple Store.