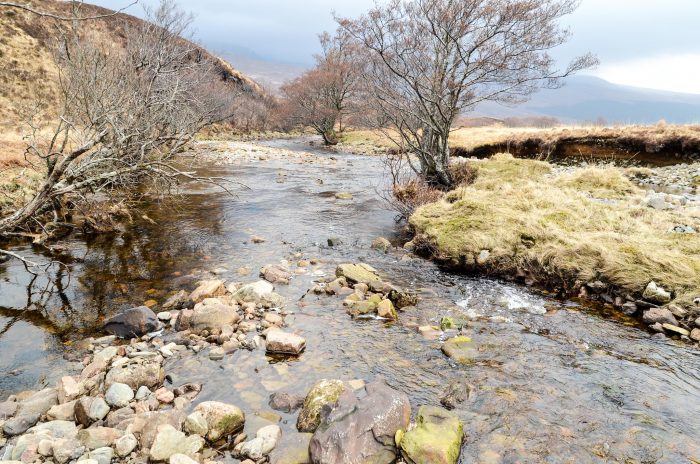 Now, building a fan base is an important step – if you want anyone to hear your work. The best way to go about is to gig. In all kinds of venues. That’s right, isn’t it?

A hut, a wild mountainside and relentless, pouring rain – doesn’t seem the obvious environment to pick up fans. But, life is never predictable…..!

My husband and I had decided we needed to find ways of creating adventures, for free. The mountain bothy seemed a good choice. Bothies, traditionally built for itinerant farm workers, are now owned by the Mountain Bothies Association. There is usually a fire, but often no loo (no fun in pouring rain). They are extremely basic, but they offer free shelter for anyone enjoying the wilderness to stay in. Which means they are in wild, remote, romantic places that can only be hiked to.

We understood the bothy code: keep it clean, make others welcome, share your fire – the logs that you have to lug there – your candles, your alcohol and your conversation.

So off we set.  Plus dog. My husband looked like a packhorse and I looked something like a squashed dormouse with my backpack. Only the dog bounded carefree through the heather. Five miles of it. We had blithely thought that five miles would pose no difficulty for hiking. But, it is different walking five miles with a full pack. Then there was the terrain itself.

It had rained pretty much constantly for three weeks. The weekend forecast said it would clear up, and we did set off with patches of blue sky, but it deteriorated from then on, finally settling into a constant downpour. The ground was sodden, so the already indistinct path – going up and down gullies and through boulders – was a sucking quagmire of sticky black treacle! Not easy to walk, without toppling over, while fording streams, and jumping from boulder to boulder with a full pack on.

Three hours later.  We arrived where we thought the bothy would be, only to see a ruin on the other side of a raging burn. By this point my legs were shaking, I was covered in sweat and I ached from hauling myself over boulders. I felt like crying and was concerned that twilight was about to descend and we had nowhere to sleep (I imagined sleeping out in the rain with survival blankets taped together with duck tape for good measure).

My husband thought we could ford the stream where it entered into the sea – if we took our trousers, socks and boots off – to get to the ruin, which would afford at least some measure of shelter! We were just debating this when eight burly men bounded up. They were also going to the bothy. The actual bothy was apparently upstream – through more boulders and across a bridge. We gratefully followed them – by this point I was nearly crawling – to the welcome shelter of the bothy. Never have I been so glad to see four walls and a roof!

Usually bothies have a handful of people staying in them; a great chance to meet interesting people who like doing wild mucky things, love nature and live interesting, quirky lives. However, this particular weekend there was a massive party of men who had all been at university together and were having a reunion. Altogether, there were sixteen of us. Fifteen men and me!

And, another dog too. So, our image of having a room to ourselves was definitely out the window. All the bedrooms were taken as we were the last to walk in – which meant we just managed to squeeze into a space on the landing under a skylight. With our very wet dog nearly on top of us. (It was an ill-fitting skylight. Rain fell on us all night. Luckily the survival blankets kept the worst off!)

The ex-uni crowd had their own party going on outside, camping with a fire by a ring of stones – they looked like something from Outlander. We stayed inside, by the lovely warm fire and candles, chatting to another group of men: Fraser, Mike and his brother Joe. It turned out that Mike is harbour master for a town near Dubai. His brother is a photographer who does interesting quirky things for a living  (I think for the Guardian) and Fraser is a retired blacksmith, full of tales, quirks, humour and with the timing of a stand up comedian.

They brought out their whisky, we brought out our home made barley wine and the evening turned out to be one of the most lively, interesting and fun that I have had in a long while…

At some point my singing/songwriting came up, and my unusual childhood growing up with all things medieval. Fraser had a field day with it: had we eaten off wooden platters, playing ditties on our recorders whilst our mother carded wool and skipped about singing madrigals? `The thing is he was not far wrong, at all, which made it even funnier! It became a tipsy theme for the evening and gave much hilarity. Mike made some notes of my website and song, Phoenix, (on youtube ) which he said he would look at once he got back to modernity.

We parted company the next morning, my husband and I having to do the whole arduous journey in reverse. I didn’t expect to hear any more from them, I thought it had been passing interest due to a tipsy conversation as we sat around a flickering fire with the wind howling outside. But, I was wrong.

A few weeks later I found the most lovely comment from Mike (the harbour master out in the United Arab Emirates) on my Youtube Phoenix song. (Something along the lines of it being a great track and that I had a stunning voice!)

Fantastic to pick up a few accidental fans, though I rather hope it won’t always be so physically arduous to do so! Perhaps I should do a Mountain Bothy Tour! A soggy singer, wet, probably unreliably tuned, instruments, with ambient lighting of candles, accompanied by sounds of wind and rain! Hmm, I think the audience would be small. But hardy.

Abi Rooley-Towle is a Moray-based singer-songwriter and holistic music teacher. She blogs on Abi’s World of Music