Gloriously gruesome stuff. No shortage of blood and gore in the usually shiny clean shopping centre, and the air filled with ghastly shrieks. Clearly security staff had been well briefed. No-one turned a hair as a young woman gorged on a corpse in the doorway of Carphone Warehouse. 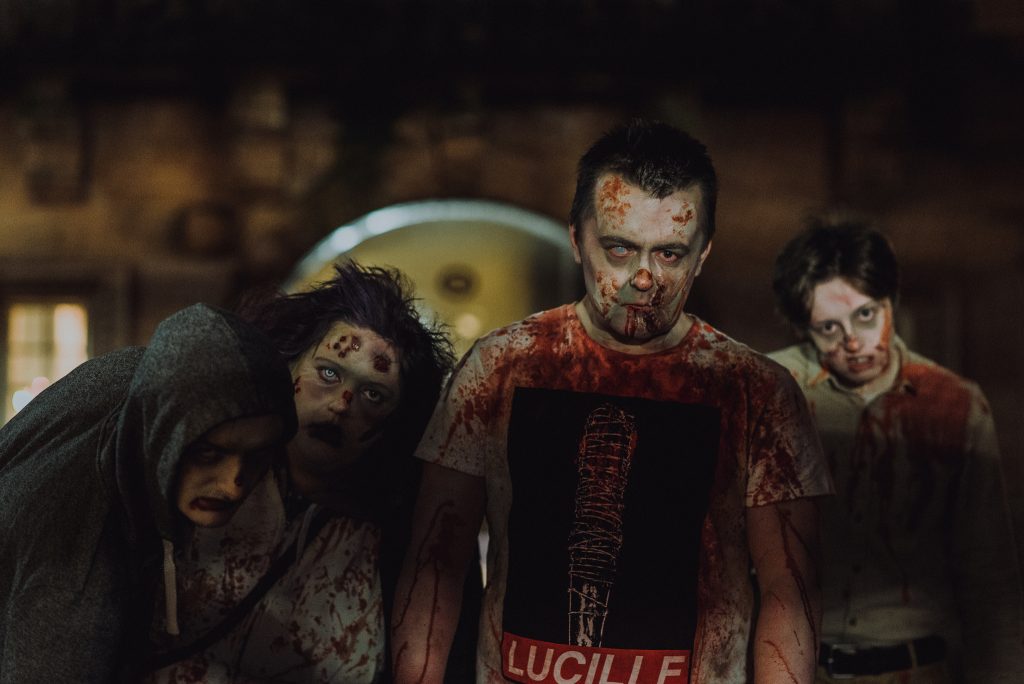 We had finally escaped the Siberian blast advancing on Glasgow streets but what lay inside? Zombies. That’s what. Hordes of them, lurching and lumbering towards us.

All just for fun – but deadly serious fun. After tracking down the hidden destination with enormous determination, the audience was arriving for the secret screening of Dawn of the Dead, one of the undoubted highlights of the record-breaking Glasgow Film Festival 2018. It was a sell out show.

That’s it: Glasgow Film has cracked the challenge of box office decline. As David Jenkins, editor of Little White Lies told the crowd crammed into seats in the centre of Buchanan Galleries waiting for Dawn of the Dead – this is the way to do it. Get people to walk for two hours through the freezing streets of Glasgow searching for the destination of a secret screening of a cult zombie film in a shopping mall. 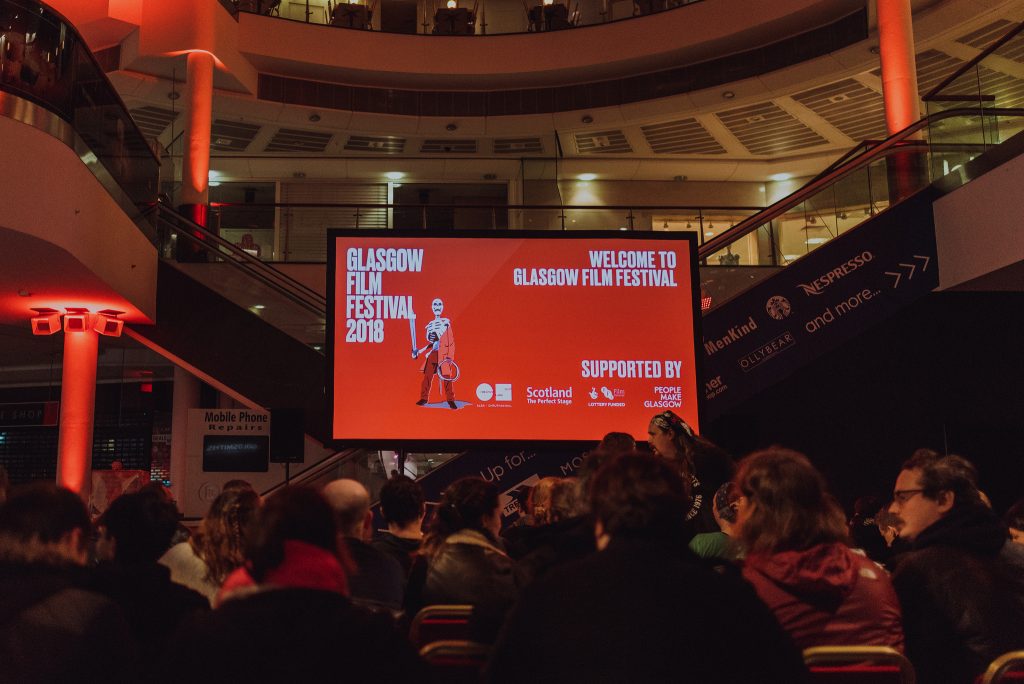 There is always a buzz about the  GFF treasure hunt and Walking Heads love being part it. A wonderfully inventive collaborative effort, it’s irresistibly nuts. Our bit is to stir up a storyline and create challenges along a route which emerges as enterprising teams solve riddles to unlock the next destination with a smartphone app (thanks to GuidiGO for the technology!).

So, as the lovely GFF review describes it, the teams are trying to make their way to safety because a deadly (sorry, undeadly) virus has hit the city. There could be something in the water. Watch out for zombies, they are lurking everywhere.

As always teams set out with extraordinary enthusiasm – and a characteristically Glasgow way with names: Vegan Zombies rivals Govan Ghosts and the Weegies and a great many more. They apply their wits, imaginations (and some Googling) to solve questions like ‘What lies beneath Enoch Square?’ and ‘What was the recipe for fake blood in Night of the Living Dead?’ and ‘Find and photograph the skeleton outside Ramshorn Theatre’.

Fight to the undeath

But what made this year different was an extra twist of real live spookiness on the virtual trail of horror. Perhaps police had been well briefed too – amazingly, no flashing blue lights appear when a fearsomely convincing fight to the undeath breaks out between a zombie and his victim in George Square. Or at Ramshorn Theatre where three young zombies chained to the doorway, reach out with ghastly yearning as treasure-hunters seek the skeleton etched into the pavement.

These were zombie actors from Scare Scotland (company mission ‘to scare the crap out of Scotland’). A nicer bunch of scary folk you would be hard put to meet. Elsewhere on the route DOTD teams lined up to be scared witless in Dread Glasgow, ‘a zombie based scare attraction’.  Even our Benny, on duty at Dread in Renfield Street, in case teams needed help with the app, emerged shaking at the end of the Dread tour – and not just from the cold. ‘They know how to build tension,’ he confided as we stomped our feet outside Buchanan Galleries waiting to greet survivors. He was just glad it didn’t extend to the Gents. 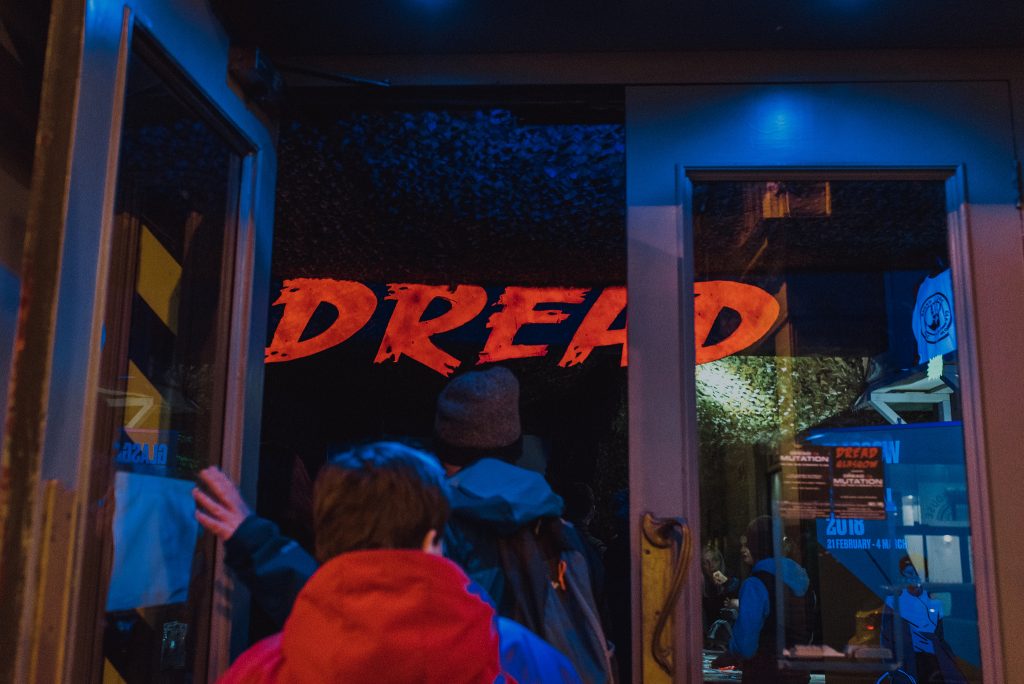 For extra thrill the weather had thrown in the rapidly advancing Siberian blast. But even that didn’t seem to spoil the fun for the teams arriving triumphantly at the doors of Buchanan Galleries. The cult of the zombie film is alive and well. Displaying their final scores on smartphone screens – some more competitively than others – they had cracked the codes, solved the riddles and survived the chase.

Well, almost. The last few metres of the trail to the secret screening was full frontal dystopian horror. The cast of Scare Scotland actors had thrown themselves into the task with relish – tomato relish maybe.

Introducing the film to smiling blood-smeared faces David Jenkins, who had participated in the hunt himself, confessed, “I’m secretly hoping that they leave some of the skeletons and the blood around for the shoppers on Monday morning,”

The undeadly virus might not really be infectious. But the sense of fun certainly was. 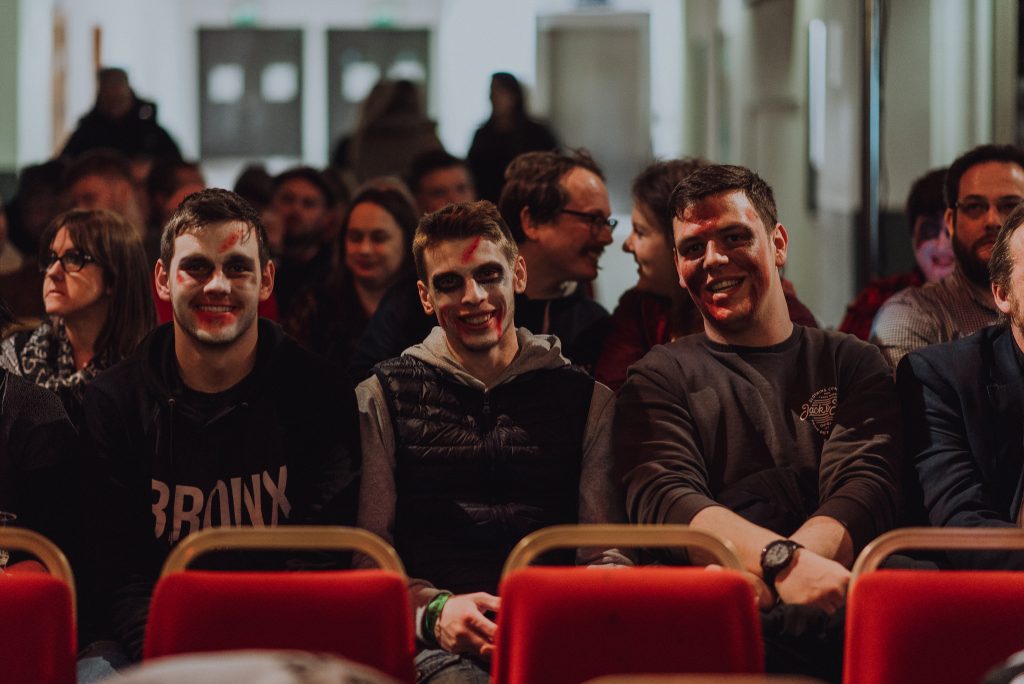 All images by Ingrid Mur with kind permission of Glasgow Film Festival, shared from their Dawn of the Dead album on Flickr (much more to explore HERE )