Message from the skies reveals HER story in Edinburgh

Message from the skies reveals HER story in Edinburgh 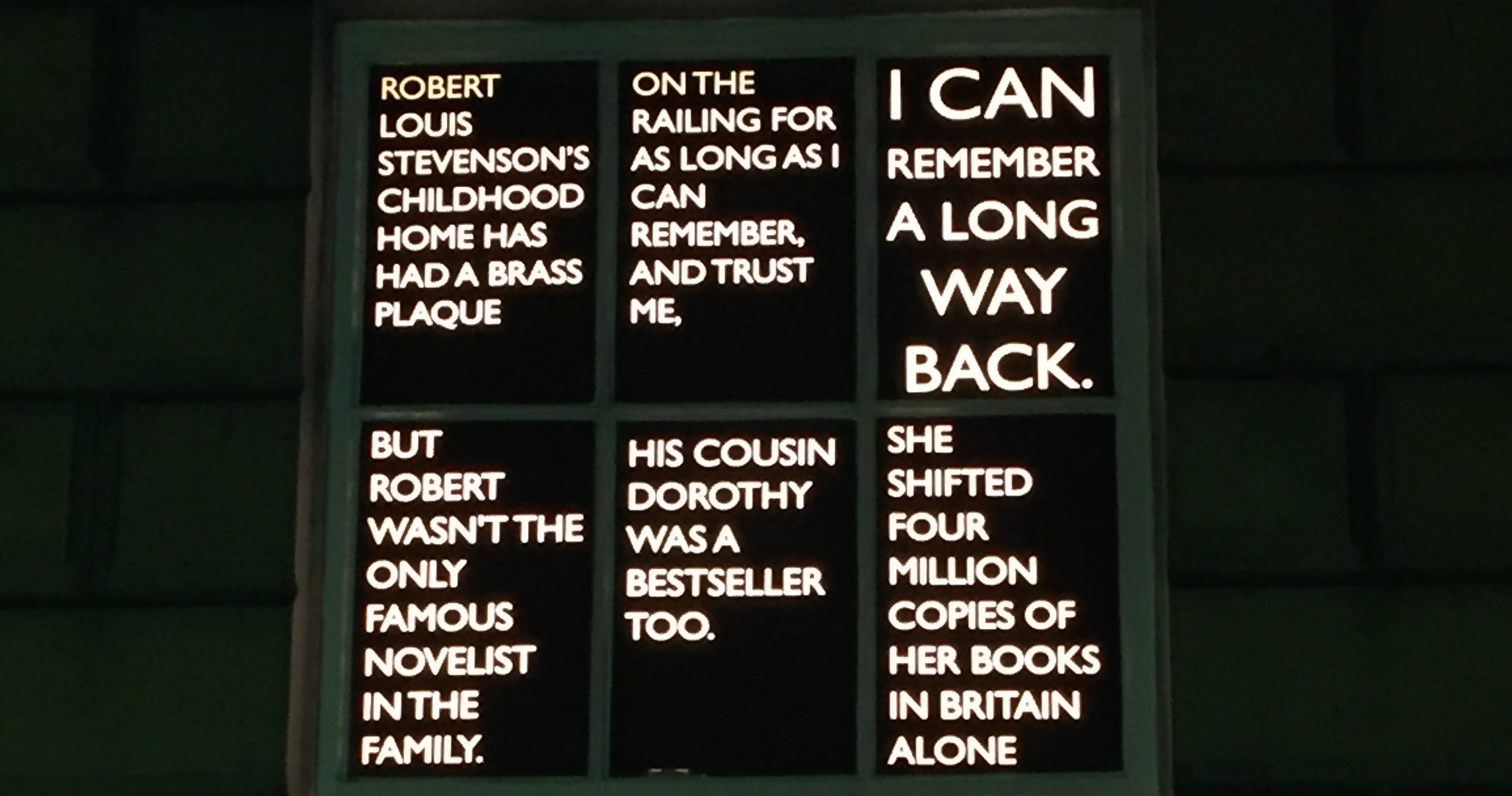 When darkness falls HER story comes to light. Fay Young takes an evening walk in Edinburgh and accidentally discovers a message from the skies.

My daily walk was later than usual. After five o’clock in January the skies are dark and pavements less inviting.  This is Leerie Lamplighter time in Edinburgh and I was remembering…

When we first came to Edinburgh I would often walk at dusk wistfully peering through windows of the New Town where curtains are rarely drawn.  You can see into elegant rooms: walls of rich reds, deep greens, plenty pastels.  An interior decorator’s colour chart brought to life.  A discreet private-public display.

Last night I found two blacked out windows, instead of drawing the public gaze inside they projected a different view with an eloquently illuminated protest shining out into the street.

‘Did you know that in Edinburgh there are more statues of DOGS than there are of WOMEN?’

That’s a sign to stop you in your tracks at 17 Heriot Row, childhood home of Robert Louis Stevenson, where the small and often sickly boy looked out for Leerie Lamplighter.  Everyone knows RLS. He grew up to create Jekyll and Hyde. His name is on plaques around town.

But how many people know his cousin Dorothy was a successful writer too, asks the illuminated window.  And where’s the statue to Muriel Spark and all the other creative female sparks in a city where “there are more statues of dogs than there are of women”?

‘Time we changed that too’

I stopped to take a fumbled photo on my phone, barely stirring the gaze of the young woman smoking on the doorstep to Number 16. And then carried on my way wondering what and why? There’s a campaign, started last year, to celebrate the achievements of women in a city where there are statues honouring all manner of men, plus the dogs – Bobby and Bum – and Wojteck the bear.

But this New Town protest, as a friend suggested on Facebook, is a Message From The Skies, an imaginative offbeat stopping point on the literary trail  co-commissioned with Edinburgh International Book Festival. Val McDermid’s thriller brings a forgotten woman writer back to life in a story told in lights projected on to 12 buildings across other streets of the city.

New Year’s Resurrection part walking tour, part street theatre, part lighting installation and soundscape, is a creative, collaborative extravaganza running from the big Hogmanay splash to Burns Night. I had caught a glimpse of it a few days earlier beneath Regent Bridge looming over Calton Road.

“At its best,” writes Neil Cooper in The Herald,  “it is like peering, not just at the grand facades of the buildings, but into the two-faced psyche of a nation’s literary history and the self-image it promotes.”

It’s also an act of redemption. Val McDermid ‘resurrects’ a successful Victorian novelist, Susan Ferrier, who once sold more than Jane Austen but who has heard of her? Val and Virago aim to put that right. Susan Ferrier’s first novel Marriage  is Virago’s book of the month for January with a new forward by McDermid.   And there’s an app luring us along a storyline – translated into seven languages – free to download.

Which is what I will do and step it out as soon as it stops snowing.  For anyone who likes walking through time and place it’s a well crafted temptation, but there are other layers of social and literary worth to be found along the way. Three young writers – Lucy Hutcheon, age 11, Maisie Dalton, age 12, and Jemma Glover, age 16  – have their names and work in lights too during January as a result of a competition run by the City of Literature.

Message From the Skies also invites residents and visitors to explore ‘Edinburgh’s iconic locations’ in a new light, making connections with the literary folk inspired by them. Returning in daylight I discover 17 Heriot Row (otherwise Stevenson House) does exactly that. It’s Chapter Nine on the story trail and it connects RLS with Dorothy Emily Stevenson, plus Muriel Spark for good measure.  And that’s just brilliant. Literally!

Dorothy Emily Stevenson, 1892 -1973,  wrote over 40 books including the Mrs Tim series based on her diaries as an army wife during World War Two.