” It was a venue that functioned straight at the heart of the Glasgow audience. Sometimes they were so boisterous that the balconies bounced around in such a way that they threatened to come down. There was an incredible dynamic between audience and performers.” 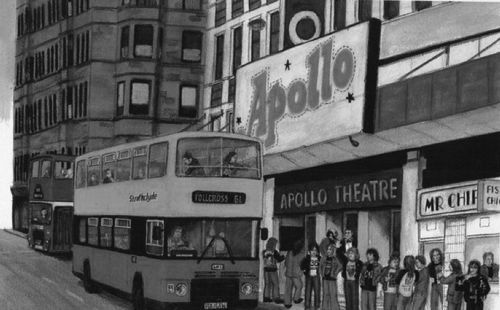 That’s Steve Hackett Genesis guitarist and songwriter  on the Glasgow Apollo which continues to cast a magic spell over anyone who went to a gig or played on the stage there though it was demolished very nearly 26 years ago.

It’s fascinating stuff. Remember the first episode published on this blog last September?  Since then the mature student from Glasgow University has been interviewing roadies, stage crew, agents, fans and of course the bands who made the old place, literally, bounce.

It wasn’t a polite place

Rather than focus on one musical genre, Kenny’s setting out to reflect the wide range of artists who played there. It is a dazzling display as we discovered when we were first tracking the course of the Apollo for Glasgow Music Tour. But there’s obviously much more to be uncovered.

We’ll be presenting Kenny’s latest report in full in the next blog post but here’s just a couple more comments about what it was like to play the Apollo, back in the day…

Graham Gouldman (prolific songwriter, 10cc): “The Apollo was legendary because of its reputation for letting a band/artist know exactly what it thought. It wasn’t a polite place. I have heard of bands being booed offstage but we always found it a warm and welcoming place.”

Rick Wakeman (Songwriter, keyboard player with Yes, presenter of Planet Rock and officially a Grumpy Old Man):  “It’s all down to atmosphere. The place was not in great condition for either the performers or the audience but that didn’t matter. Somehow its that X Factor that made it pure rolk and roll for band and audience alike.”

Wakeman,  right now performing at Edinburgh Festival Fringe, returns to Glasgow next year on his  Journey to the Centre of the Earth tour when he will be playing the Clyde Auditorium.  How does it compare with the Apollo?