Making it at T Break

Making it at T Break

Back in the mists of time, a young unsigned band loaded their kit into a van and set off on the long and winding road from Kilmarnock, Ayrshire for their first gig at T in the Park.  With this year’s T Break winners just announced it’s worth remembering what a gig in the unsigned band’s tent can lead to.

‘I remember being incredibly nervous. I don’t know what we were thinking but we drove all the way from Ayrshire with our drum kit set up in the back of the van, cymbals and stands crashing every time we turned a corner.’

That’s Biffy Clyro bassist James Johnston remembering the band’s first T in the Park performance in 2000. Hard to believe it now but 16 years ago Biffy took the stage in the unsigned bands tent. But as Jim Gellatly points out previous T Breakers also include Travis (aka Glass Onion), Snow Patrol (Polar Bear) and The View as well as Biffy Clyro.

You can hear Jim talking about this extraordinary home grown success story in the latest addition to the ever-expanding Glasgow Music Tour. Jim and Biffy go back a long way (our GMT guide gave the band their first radio play in 1999). But T in the Park goes back even further, which is why we have included Wellpark Brewery on our audio tour.

An explosion of Scottish music talent

The roots lie in the 1980s when there was an incredible explosion of young Scottish music talent. Artists like Hipsway, Love and Money, Simple Minds, The Associates, Blue Nile, Orange Juice and many others were playing the best and most iconic venues across the country.

However, as Tennent’s George Kyle remembers, Scotland lacked music infrastructure,  ‘Bands still felt they had to head to London to make it.’

Tennent’s Live was launched in 1988 with a simple but audacious aim: they wanted to tap into the Scots’ passion for music and ‘make music happen all over Scotland.’  And they did.  With an investment of £2.5 million Tennent’s Live delivered 2,500 gigs taking thousands of artists – from Tina Turner to Rod Stewart – across the length and breadth of Scotland to all kinds of venues – from community halls to the Barrowland Ballroom. All covered in the listings magazine Tennent’s Live News.

‘You’re kind of up against it at a festival but in a good way.’

That led, as we’ve said, to the launch of T in the Park, in 1994, created jointly with DF concerts and Tennent’s Lager, but initially known as the Tennent’s Live Festival. It was the success of Tennent’s Live that helped to attract the best global, national and local acts to the park.

Remember who made it at T Break?

Two years later, in 1996, came T Break, set up to celebrate Scotland’s unsigned musical talent. At first that involved local bands competing in music venues across Scotland. Now artists submit demos to a panel of music industry experts for a chance to play on the T Break stage at T in the Park – as well as gigs at venues like King Tut’s and Liquid Rooms, and other opportunities for fame. And sometimes fortune.

‘We got the bug early on and we just had to do it every year we could,’ James Johnston tells Jim, which probably explains why Biffy Clyro has played the festival more than any other band.

‘You’re kind of up against it at a festival but in a good way. Somewhere like T there are so many great bands playing you never expect people to come and watch your band, you always hope that they will but it just makes you want to try that bit harder and give it everything you’ve got and I think that stood us in good stead for all the shows that we’ve done down the years. You know you really have to give it everything and and just hope that people are going to enjoy it.’

There’s much more to this music story so please stay tuned.

DOWNLOAD the new expanded Glasgow Music Tour FREE and Jim will be waiting for you at Stop 7 in T Time Part Two. 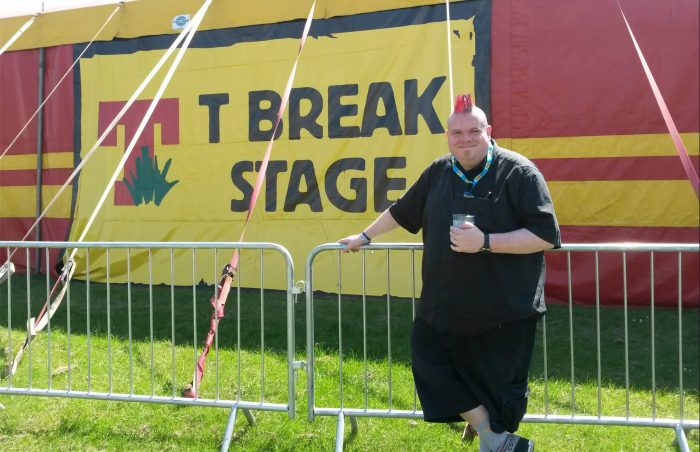