To the river.  On the way to the fourth star of A Brisk Walk we pass symbols of the Glasgow that has all but disappeared.  Can Typographical House take advantage of the tide that has turned?

Ironically this is the youngest building on our walking tour. Right now the building is a sad sight. Forlorn and weather beaten, it stands out in what our guide Professor Johnny Rodger memorably describes as the ‘gap-toothed beauty’ of Clyde Street. Approaching from the west, we see the exposed party wall of a once proudly brutalist building, black plastic sheeting tattered and torn by the elements.

Fifty years ago this must have been an impressive – even sparkling – sight: glass and pre-cast concrete distinctively different from the red sandstone warehouses and other remnants of the shipbuilding industry.  The beautiful illustration by Rae-Yen Song perhaps gives us an idea of what the future might have looked like. 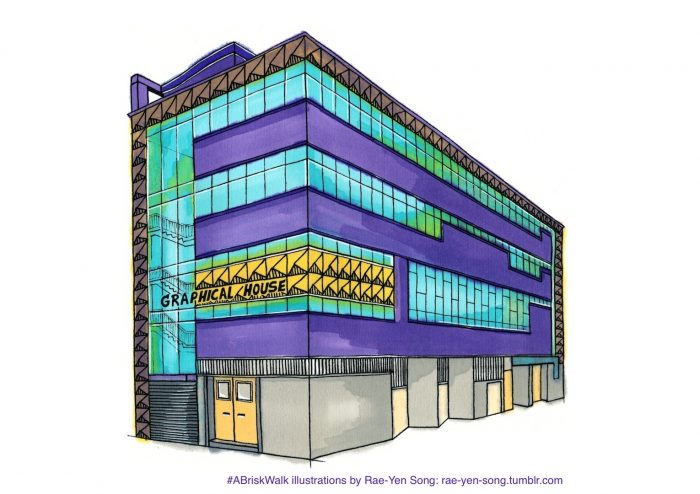 Was it hope or hubris that led the newly merged print union to invest in a bold new headquarters on the north bank of the Clyde?  When it opened in the mid 1960s this was SOGAT House. The Society of Graphical and Allied Trades (SOGAT) was proud of its origins as a craft workers union.  But at a time of demarcation disputes and rapid technology changes in the print and newspaper industries, it was never a happy marriage.

For some reason the name above the door changed to Typographical House. Then the Typo disappeared and it became simply Graphical House. The union occupied some of the offices, and let out the rest. The meeting hall on the first floor often echoed to the sound of lively Trades Council meetings.

The office block had been constructed between 1961 and 1965 by Glasgow architects Rogerson and Spence. They were responsible for other modernist buildings which feature on  the Scottish Brutalism website – including Shieldhall sewage works.  But here in Clyde Street Johnny Rodger links Rogerson with Salmon and Gillespie, the architects of two older buildings we visited earlier. “In many ways we find links in Glasgow architecture from the turn of the 20th Century right up to the 60s and 70s.”

Typographical House is not listed so it is not on the Buildings at Risk Register. The building has deteriorated since the adjacent Georgian townhouses were demolished in 2007-8. 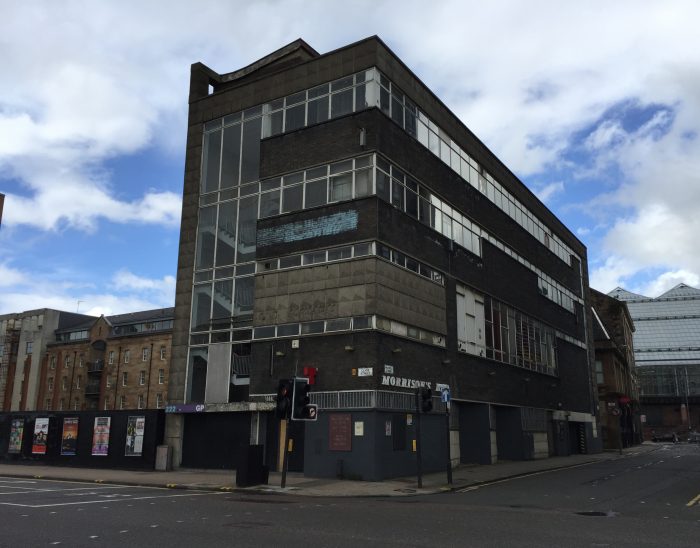 It is still owned by Unite (which eventually absorbed the print unions among others). Property developers have shown interest in demolishing the building to make way for luxury flats. But the old office block is in the central conservation area so there might be hope for it. Johnny Rodger asks: ‘Does it deserve to be rescued? Is it a special modernist building?’

Typographical House has seen several incarnations.  After the Trades Council moved across the river to Carlton Place, the meeting hall was leased to the Ceilidh Club. Once again Glasgow’s live music reinvented a redundant space. If we walk round the corner into Maxwell Street we can still see evidence of the Riverside Club which occupied the first floor for over 20 years years until 2007. Their proud motto was Blood, Sweat and Reels.  [Hear more on Glasgow Music Tour with Jim Gellatly.]

Now on to another derelict building which is much closer to demolition.  But, take heart, we will be passing the Clutha Bar [also on Glasgow Music Tour of course]. New life is possible when and where there is a will.