Past, present and future jostle together in city streets.  We wander up an alley to find a beautiful Charles Rennie Macintosh building squeezed into an improbably tight space. Linger by the Finnieston Crane on the Clyde to hear music in the wind. Pause by an old factory in the East End to discover a new arts hub emerging inside.

Dynamic cities are constantly changing and adapting to the needs of the times. In Glasgow, as in other post-industrial cities it’s no surprise to find that arts and music are part of that evolution. As a result clusters of creative hotspots are beginning to emerge on our walking tours.

It’s great to see our new audio tour, A Brisk Walk: Buildings at Risk, getting off to a really lively start. Lots of interest in the launch at The Lighthouse last week has been followed by friendly response and conversations online.  We’re always struck by the overlapping stories on our tours.  Glasgow School of Art, for example, is a hotspot where art, cinema, music and architecture converge – and seem to conspire with one another.

So, on A Brisk Walk, our guide Professor Johnny Rodger comments on the changing identity of  several venues which criss-cross the route of Glasgow Music Tour.  How 520 Sauchiehall Street evolved from piano showroom through cinemas of differing status  back to its musical origins with a series of nightclubs until Club 520 closed in 2011-12. (Could music bring it back to life again?)

Down by the Clyde, the 1960s Typographical House – built for print union SOGAT – has also seen several incarnations. It’s lain empty for several years but walk round the corner into Maxwell Street and we can still see evidence of the Riverside Club which occupied the first floor for over 20 years years until 2007. 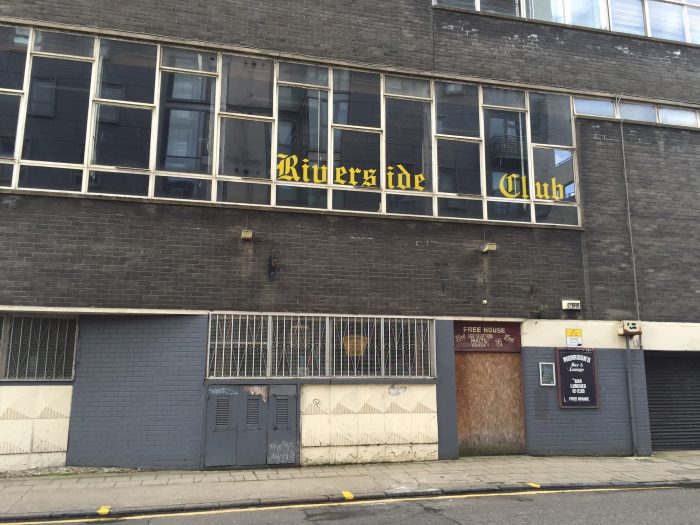 Blood, sweat and reels was the motto of the Riverside Club

A Brisk Walk ends with the revival of the old Clay Pipe Factory as an arts hub – right across from St Luke’s.  The old church which is now thriving as a new music centre and restaurant is not yet on the Glasgow Music Tour but we hope to add it soon.

And, of course, in return architecture is an essential part of the never-ending story told by Glasgow Music Tour guide Jim Gellatly – his trail takes in places as distinctly different as the vibrant Stereo cafe bar  in the beautiful Macintosh building in Renfield Lane,  and O2 Academy in the stunning Art Deco cinema on the Southside. 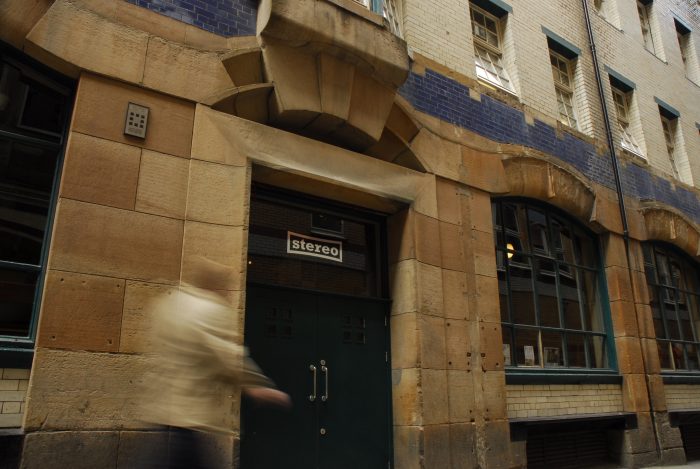 Dereliction is the theme which links the six very different buildings  featured on A Brisk Walk but that’s much more upbeat than it sounds. Empty buildings may be an inevitable consequences of industrial decline, but, as Johnny Rodger points out,  those empty warehouses, factories and schools no longer needed for their original purpose can be the source of renewal and regeneration. ‘Finding new use for a building is the main purpose of the Buildings at Risk Register,’ says Shona Simpson, Built Heritage Officer for Glasgow City Council,

And as Jim Gellatly points out that’s nothing new in Glasgow. Changing times have been inspiring new uses for redundant buildings for over 100 years.  The Britannia Panopticon, was a Victorian warehouse brilliantly reinvented by the early 20th century entrepreneur AE Pickard (now brought back to life by the equally enterprising Judith Bower).

Who knows what the future will bring.  The highly successful SSE Hydro – a new Clydeside landmark on the sprawling site of the Scottish Exhibition and Conference Centre – is another symbol of Glasgow’s rapidly changing cultural scene.  But there’s an equally potent symbol in the Finnieston Crane.  In Amsterdam a dockside crane has been converted into the Faralda luxury hotel (for those with a head for heights). In Glasgow the giant cantilever crane built in 1931 stands as a monument to engineering. And a continuing inspiration to artists and musicians. 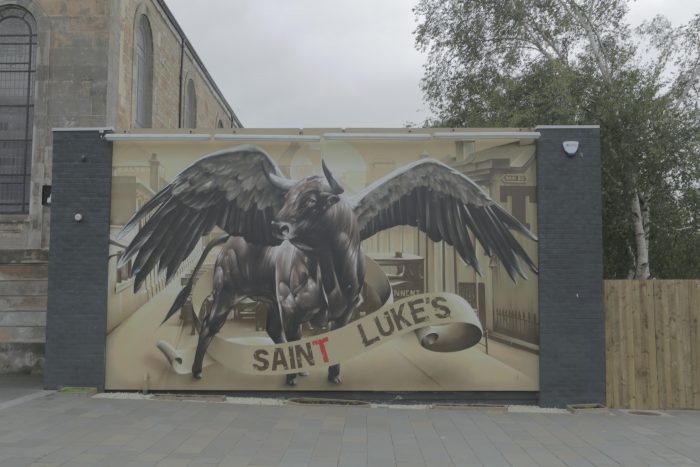 Saint Luke’s: back to life with music