The mystery of Paisley

The mystery of Paisley

‘Unravelling the air of enigma could be what gets Paisley the UK City of Culture Title in 2021.’ Edinburgh student Tess Mallinder Heron visits Paisley for the first time and finds a place of mysterious contrasts.

I arrived in Paisley on Wednesday evening. I had just left a bustling Glasgow, with its commuters, traffic and neon lights. Paisley seemed like a ghost town in comparison. Only a few people could be seen, walking at a leisurely pace in the empty town. Nearly all the shops were closed, making me wonder if I had just stepped through a wormhole and arrived on a Sunday morning. No fast food chains in sight. The only thing I could hear was the rustling of the trees and the litter.

Another thing I noticed when I arrived was the contrast between the new and the old. There were ugly grey buildings, which looked like they had been built in the 60s and 70s. But, accompanying them, were beautiful old buildings, seemingly forgotten, with so much attention put into the architecture, their windows now broken and some with ivy covering their history. Of course, there are also grand buildings which have been taken better care of, such as the Town Hall, which I attended to see the SAY award.

When I walked through the doors of the Town Hall, it was another Paisley I saw: energetic and filled with laughter and music. People there seemed determined give this town a reboot and to show the world what it is capable of.

An air of enigma

But what really interested me was the amount of derelict buildings. They looked like they had once been magnificent houses and objects of admiration. What had happened? Who were the owners? They all seemed to hold different stories and mysteries waiting to be solved. I wondered if they still had furniture and objects inside, proof that they had once been full of life. I read that the old Royal Alexandra Infirmary, a majestic abandoned building, is said to be haunted today. One can only wonder what other legends have stirred from these places. 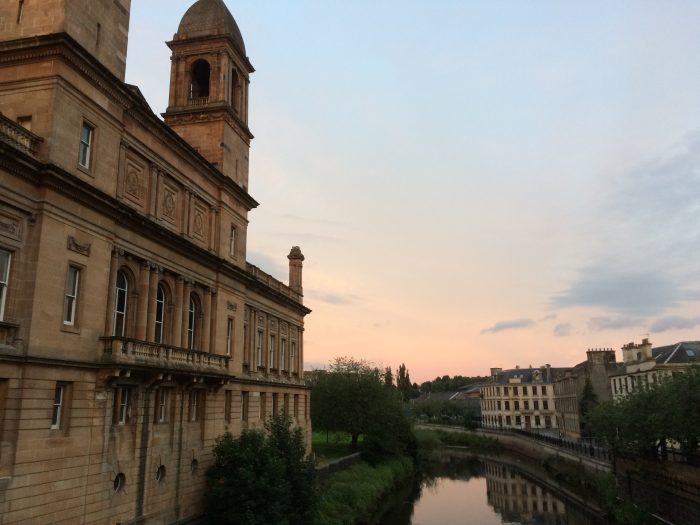 The town hall on the left and, to the right, an abandoned-looking building

Paisley is also full of monuments. I saw at least three in my short walk from the train station to the Town Hall. The war memorial caught my eye as I walked past it. It was unveiled in 1924 and pays tribute to all those from Paisley who fought and died in the Great War. I watched a video of the unveiling ceremony, attended by a mass of people. Now, its towering presence is striking in a deserted square on a Wednesday night.

Paisley is a unique Scottish town, with its own history and people. Perhaps this is only because I am an outsider, but to me, what makes it special is its air of enigma. Unravelling this enigma could be what gets Paisley the UK City of Culture Title in 2021. I think it would be great to have an app for young people, with potted history and historical footage, but also with information on what is happening in the different buildings – a mixture of new and old.