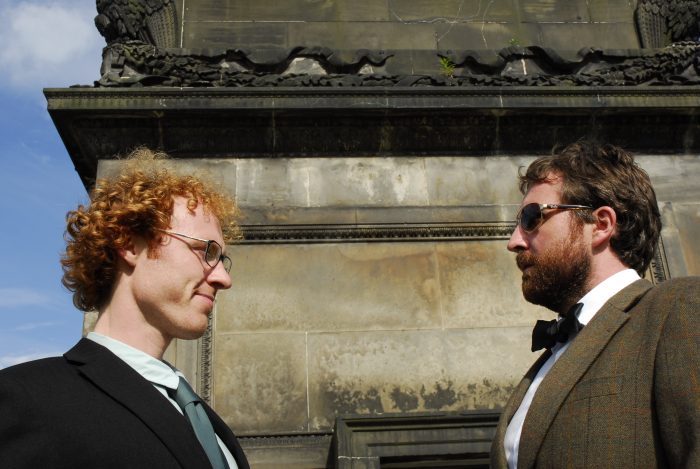 ‘So, why is there a big statue to him?’ Harry asks at the foot of the towering monument to Henry Dundas. The answer from ‘ Professor’ Jamie is deadpan but spot on the money: ‘He was a political powerhouse, Harry… and I think he may have paid for it himself.’

They played it for laughs, did our Jamie and Harry, but there’s a serious undercurrent to the surreal climax which takes place high above Edinburgh’s St Andrew Square. And although it’s six years since we first published the Edinburgh Comedy Tour (part walking tour, part slapstick Fringe show), this year there’s a topical aura to the scene around that extraordinarily tall plinth in the middle of Edinburgh.

Dundas stands 150 foot high (taller by a long way than the eight ton General Robert E Lee and his horse in Charlottesville). He can be seen from many viewpoints in Edinburgh. 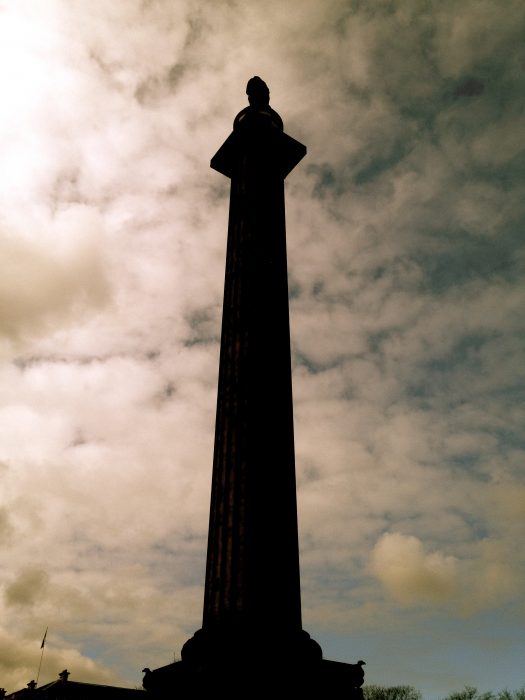 ‘Was he a good man, the Viscount?’ asks the wide-eyed Harry (played by Harry Gooch). Our Professor (Jamie MacDonald) then lists the Viscount of Melville’s achievements: the last Lord to be impeached in the House of Lords for misappropriation of public funds had successfully delayed the abolition of slavery and, by the way, botched the Siege of Dunkirk in 1793.

Which does indeed beg new questions in the growing discussion around monuments to history’s bad guys. What should we do with those statues to the political powerhouses who have made their mark on every nation? Do we tear them down or confront the past with clear-eyed understanding of the complexity of human nature? The good, the bad and downright despicable all play their part in shaping our townscapes.

Do we set the record straight (as campaigner Adam Ramsay attempted to do by superglueing a short but pithy CV to the foot of the Dundas plinth)? Or discreetly ignore it (as Edinburgh City Council decided by quickly removing Ramsay’s notice)?

Similar quandaries face East European countries. Budapest solved the problem by towing the giants of the communist era out to rust in peace in a tourist attraction on the edge of the city (handy for towing back into place if the political climate changes). 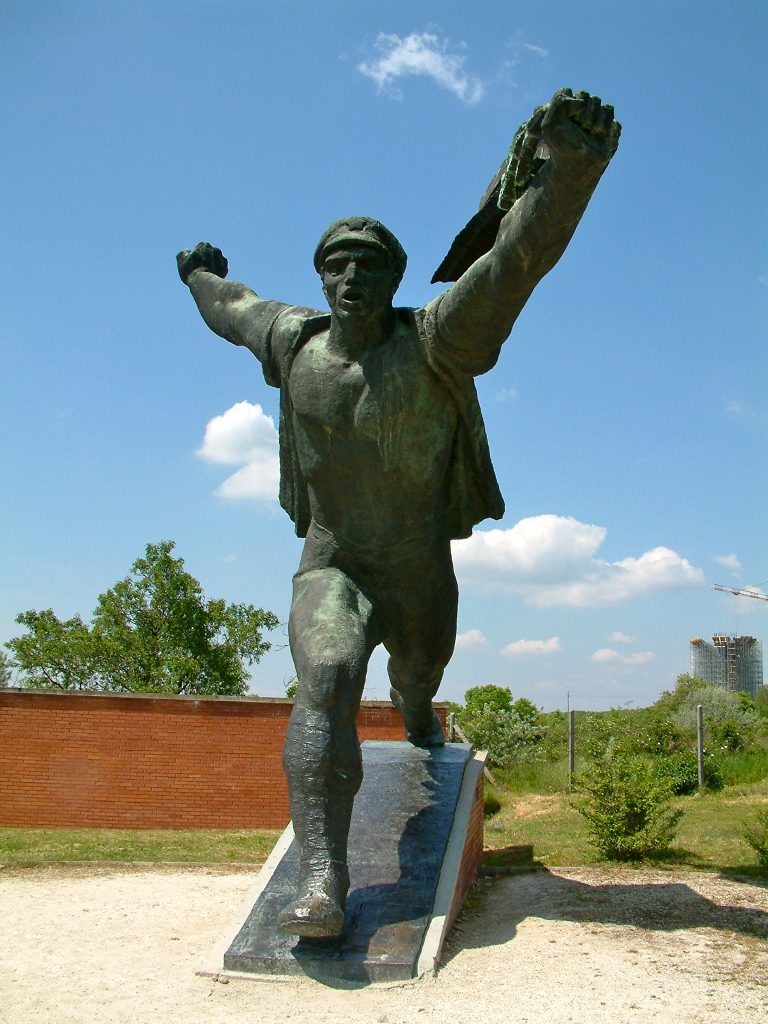 But there are other ways to confront our demons. Berlin has faced the horrors of the holocaust and Nazi rule with moving and inspiring honesty. Liverpool Slavery Museum tackles the shameful source of great civic wealth with the same compassionate courage, making links with today’s human trafficking at the same time.

Glasgow has so far found it more difficult to recognise the city’s links with the slave trade. Like Liverpool it could celebrate a strong abolition movement while commemorating the darker truth of the source of Merchant City wealth. There are many admirable projects: walks, talks, discussion events, creative productions and poetry, and not least Stephen Mullen’s book ‘It Wisnae Us’ (and many of these feature on Walking Heads free audio tours through music, architecture and along the Clyde).

But there is not yet a permanent exhibition with a compelling storyline making clear the trade which built the Merchant City and made the fortunes of men like Buchanan, Cunninghame, Ingram, Glassford…

That’s changing. Kate Tough’s poem, People Made Glasgow, is a powerful expression of the growing campaign to recognise the city’s past. Her Glasgow Slavery Remembrance at Kinning Park Complex brings people together for film, food, poetry and discussion over a Communal Meal inspired by African Caribbean cultures.

So what about Viscount Melville? As debate grows some campaigners urge not only disposing of the statues but renaming streets that tell a story hidden in plain sight. There’s the ‘tobacco lord’ Buchanan immortalised in Glasgow’s style mile, but there are Jamaica Streets in Edinburgh, Greenock, Dundee, and Aberdeen too.

It could prove difficult to obliterate all trace of the Viscount. When Harry asks innocently if there’s a street named after Henry Dundas, he gets another long answer. Not just one.  There’s one in Edinburgh, another in Hong Kong, ‘a shire in Australia, a county in Canada…the RBS building across the road is known as Dundas House.’

Perhaps the most effective way to bring Henry Dundas down to size is to take his story to the street. Not such a tall order? Shame the devil, tell the truth – there’s plenty of room on the plinth.

Edinburgh Comedy Tour confronts other larger than life demons of city history. Download When Jamie Met Harry free audio tour for an alternative tour of the capital.  You can also listen to the tour HERE on our website. 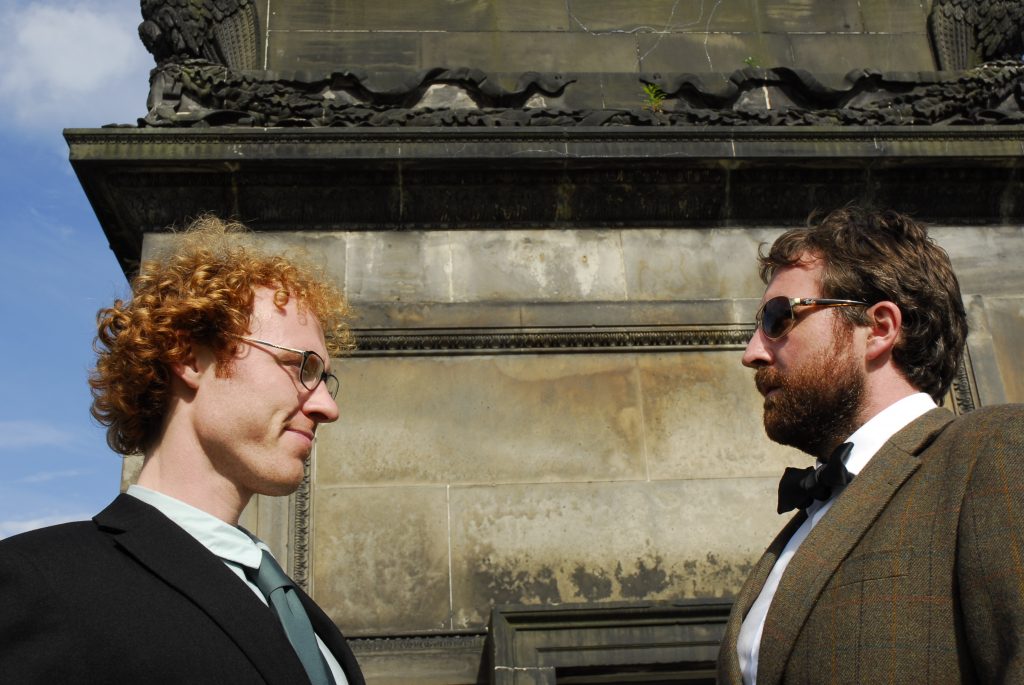 Room for a plaque